Nigel Farage warned on Wednesday there is a “political stitch-up of the most extraordinary nature” and insisted the betrayal of the Brexit vote is more than he could have ever imagined. Hosting his LBC show, Mr Farage highlighted on the comments made by Mr Carney and added: “It extends, of course, to those they appoint to senior office like Mark Carney, the Governor of the Bank of England, he was at his same old tricks again today.”

It’s political stitch-up of the most extraordinary nature

Mr Carney today warned the chance of a no deal Brexit is now “alarmingly high” as the terms of the UK’s exit from the European Union hangs in the balance.

Speaking to Sky News, the Bank of England Governor said there are “lots of things to worry about” in a no deal scenario but insisted the financial sector is not one of them.

However, he then warned: “I would then add though that financial stability, the system functioning, is not the same as market stability. 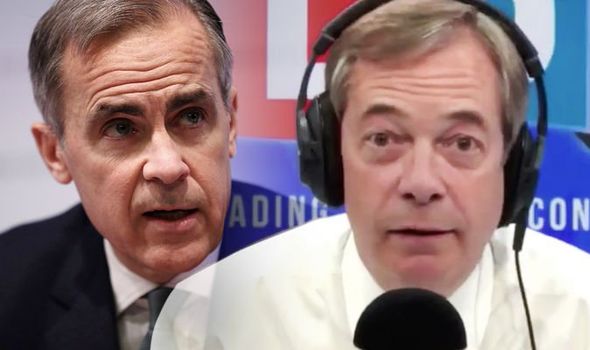 He added: “There was an admission there from Carney, wasn’t there? That actually the country is ready for a no deal Brexit.

“Chris Heaton-Harris, who I have known try well and we were elected today on the same day back in 99 to the European Parliament. One of the reasons he has resigned as junior Brexit minister is because the Government won’t countenance us leaving on WTO terms which he says we are ready for.

“But still despite all of the that Carney puts out a negative message, as do all the apparatchiks and appointees of Government. I think, as a country, we are feeling so let down and so betrayed.

“At least half the country feels betrayed.”

Mr Carney defended his gloomy forecast of a no deal Brexit today as the UK’s April 12 deadline fast approaches. He told Sky News: “Unfortunately I think it proved accurate.

“It’s alarmingly high now. We’re in a situation where the expressed will of Parliament is for some form of deal, so to put it in the double negative: parliament is against no deal.”

“So no deal would happen by accident, it would happen suddenly, there would be no transition – it is an accidental disorderly Brexit.”

This morning Nigel Adams, junior minster at the Wales Office quit over the concessions to Mr Corbyn. He said of Mrs May: “It now seems that you have decided a deal – cooked up by a Marxist who has never put British interests first – is better than No Deal.”

And this afternoon junior Brexit minister Chris Heaton-Harris, who was tasked with planning for No Deal, also walked.

Mr Heaton-Harris posted his resignation to the Prime Minister on Twitter, which was ‘liked’ by Brexiteer and chairman of the European Research Group, Jacob Rees-Mogg.

The letter says: “I have constantly voted in Parliament for us to leave the European Union on March 29, 2019. I truly believe we should have honoured the result of the 2016 Referendum and left on that date.

“Indeed, every time we seek an extension to this process, we diminish faith in our political system and the good people, from all political parties, who serve within it.

“I simply cannot support any further extension to Auricle 50, and this obviously means I cannot stay in Government.”

Sadiq Khan fury: TfL’s finances ‘on a knife-edge’ as London under microscope