Home » Europe » Brexit shock: How May could have deciding vote on which EU chief takes over exit talks

The outgoing Prime Minister has vowed to be “constructive” in crunch negotiations in Brussels tonight, but could eventually be asked to make a defining decision. Gaping divisions in European Union decision-making circles has virtually split the bloc in half for a plan to appoint Dutch socialist Frans Timmermans for the top job. The backroom plot, cooked up by Donald Tusk, Angela Merkel and Emmanuel Macron at the G20 summit in Japan, is facing staunch opposition from the Central European Visegrad Four – Hungary, Poland, Slovakia and the Czech Republic – and Italy.

While usually individual member states would have a veto at the Brussels negotiating table, Mr Tusk has decided to introduce “reinforced qualified majority” to prevent such a scenario.

The European Council President wanted to leave “threat” looming over EU leaders at tonight’s summit to ensure they reach a decision tonight or tomorrow morning over breakfast.

Under his rules, the next European Commission president must have the support of at least 21 member states, and those countries must be home to at least 65 percent of the EU’s total population.

If the Visegrad countries and Rome decide to follow through on their promise to block Mr Timmermans, this would leave Mrs May with a deciding vote. 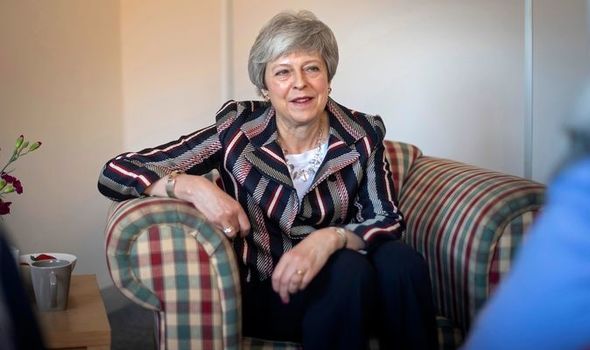 This would essentially hand the outgoing Prime Minister the power to decide on who faces up to her successor in the next round of Brexit negotiations.

Entering what is expected to be her final Brussels summit as Prime Minister, Mrs May said pledged to be “constructive” in her approach.

UK sources believe that she will vote with a “majority” if EU leaders are forced into a top jobs ballot.

EU officials are hopeful that leaders won’t be asked to vote and instead build a “consensus” on a potential candidate.

One official said: “The threat of qualified majority voting is there so leaders can’t sit on their hands and say, ‘No, no, no’.

“It’s there to get everyone involved and not blocking.”

Mr Timmermans, a former Dutch foreign minister, claims he is an anglophile and boasts of being fluent in seven languages.

But he is widely disregarded by Central European leaders, who claim that the Dutchman doesn’t understand their cultural.

Czech leader Andrej Babis also voiced concerns over the suggestion of the Dutchman being handed the bloc’s most senior role.

Mr Babis said: In the past we had the feeling that he is not positive about our region.”

He also insisted that the backroom stitch up does little to promote gender balance in the EU’s highest offices.

The firebrand leader said allowing the socialists to claim the top job would be “humiliating” and a “historical mistake” for the centre-right EPP to make.

He accused EU leaders of being drawn to a deal struck by the “German and French leadership”.

Mr Orban added: “The deal consists of several elements. According to this agreement Frans Timmermans would be the president of the European Commission.

“Let me draw your attention with this letter of mine to the fact that the support of this deal by the EPP would be a very serious or even historical mistake.

“This would mean that a political party, which has won an election, would hand over the winning position it has fought for.

“First and foremost, this is humiliating. Secondly, this would completely undermine our authority and dignity in the world international politics. Thirdly, this would be a serious blow on the prestige of the European People’s Party in the eyes of our voters.”

Gracie Spinks: Five police officers investigated over handling of incidents before her death

Gardaí look to peak at right time for charity

COVID-19: As Wales lifts most of its coronavirus restrictions, paramedics say they are ‘exhausted’ and fear being ‘overwhelmed’