The two MPs clashed on Sky News when Ms Powell pointed out a no deal Brexit scenario must be on the ballot paper of a second referendum if the Government ever granted Remainers in the Commons a second vote. It comes as Liberal Democrats leader Vince Cable pledged to vote for the Prime Minister’s withdrawal agreement if he came with an amendment that promised a confirmatory referendum before ratification. But Mr Cable admitted a no deal option would have to be added to the ballot paper.

The shocking claim prompted Labour MP Lucy Powell to blast: “You can’t have Remain versus the deal. Even Vince Cable said on the radio you have to have no deal on the ballot paper.

“No deal could well win, your leader said that this morning.

In stark contradiction to her party leader’s statement, Ms Jardine responded: “No. Remain or the deal. We are the party which is challenging, we are the main party of Remain Liberal Democrats.

“Our line is that we have a referendum with Remain or the deal. 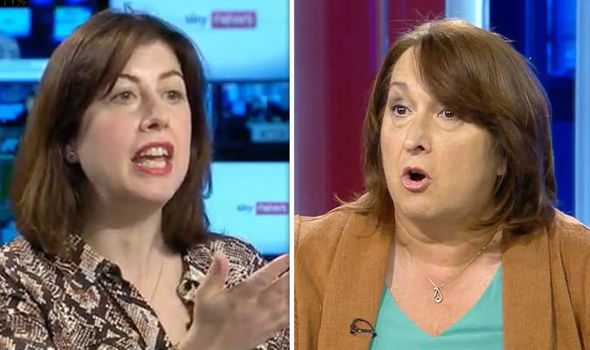 So the 40 percent of people polling that they want no deal, they won’t have an option

“That would put it to bed: a confirmatory referendum where the people have the final say.”

The Labour MP then pointed out that “the 40 percent of people polling that they want no deal” will, therefore, not have an option to choose from.

The arch-Remainer shocked viewers when he claimed that it would be legitimate to offer no deal as a third option in a democratic voting system.

He said: “We’re not talking about re-running the referendum. There may be quite different questions this time. And we certainly know an awful lot more about what Brexit entails than we did then.

“I would be open to the idea of saying the choice is between Remain and the Government’s deal modified by the Labour Party or whatever.

“But if there is a large swell of opinion which says quote no deal, whatever that may mean, then that is an option which you’d have to offer in democratic voting.”

He added: “There will be three options and you can formulate them as two questions.

“There is a lot of work being done to how this can be done in a balanced and sensible way.

“Parliament would have to resolve what the questions are with the advice of the Electoral Commission.”