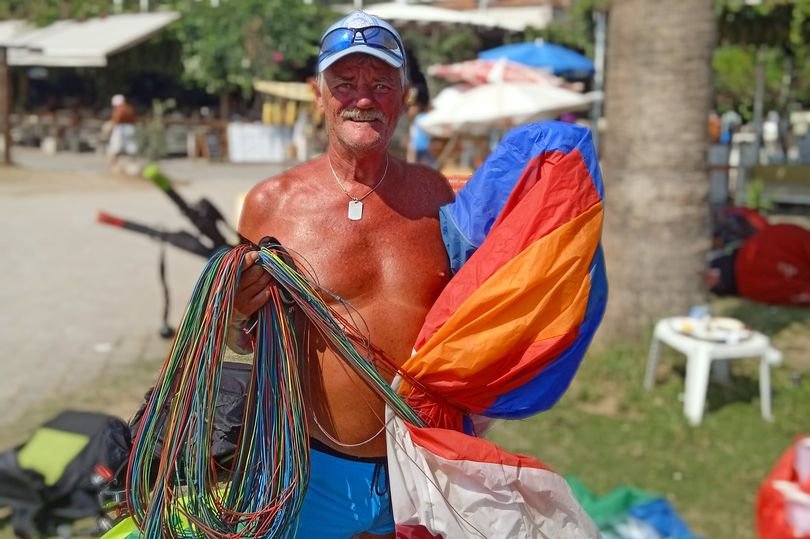 A pensioner has been hailed a hero after he commandeered a taxi boat to rescue a woman out at sea.

Former safety diver and top parachutist Mark Roberts, 72, was on a beach in Turkey when he saw the paraglider plummet into the water.

He described seeing her in a ‘semi-freefalling battle to regain control of her Roman candle-shaped canopy’ when it failed to open properly.

Realising an emergency was unfolding in front of him, he ordered a nearby taxi boat driver to rush him to the scene.

He said: ‘The impact on the water could have knocked the stuffing out of her or worse. If she was under the canopy entwined in the scores of guy ropes and, panicking, they’d pull her down.

‘Even worse, there was no-one seemingly alert enough to jump to.

‘She crashed far out to sea, too far to swim to help her, so I used a bit of persuasive shouting and bawling to get the attention of a somewhat startled skipper of a taxi-boat tied up close to the beach.

‘True, it was more of a hijacking. I ordered the young lad to ‘go, go go’ pointing in the direction of the capsized and sinking parachute which no-one else seemed to have noticed.

‘Once he realised the urgency, he reacted brilliantly and we were with her in less than two minutes.

‘I jumped overboard and swam under the still floating part of the ‘chute where the woman was in a bubble of air, but obviously disorientated or in shock. And of course, the young lad in the boat couldn’t help – he had to back off to ensure that the submerged parachute cords didn’t get tangled up in his propellers.

‘Her rigging had already started to weave around her legs underwater but she was thankfully a bit calmer as I too began to untangle it which made the job easier.

‘I’m not as young as I used to be. It took a bit of effort. Parachute rigs are heavy enough on dry land, but saturated with sea water they weigh a ton.’

The woman-believed to be a local – simply abandoned her equipment and left the beach following the rescue.

In a remarkable coincidence, is not only an ex-diver but also a former member of the Red Devils Freefall Team, a crack squad of elite parachutists employed by the British Army.

He credited that experience for keeping his cool. He said: ‘A bit of know-how in underwater rescue and keeping calm, and understanding of how parachutes can be fatal when submerging in water with the jumper not quite with it in survival mode.’

He said: ‘I’ve known Mark for years and am not surprised he jumped in – or dived in as the case might be. His knowledge of parachuting and experience in underwater diving was almost God-sent in this emergency.’

‘She was a very lucky lady. There were no other vessels around and I still don’t think anyone on the beach happened to catch those last 30 seconds of her plummeting down under a collapsed canopy.’

A Symbol of Stone, Faith and Frenchness Goes Up in Smoke