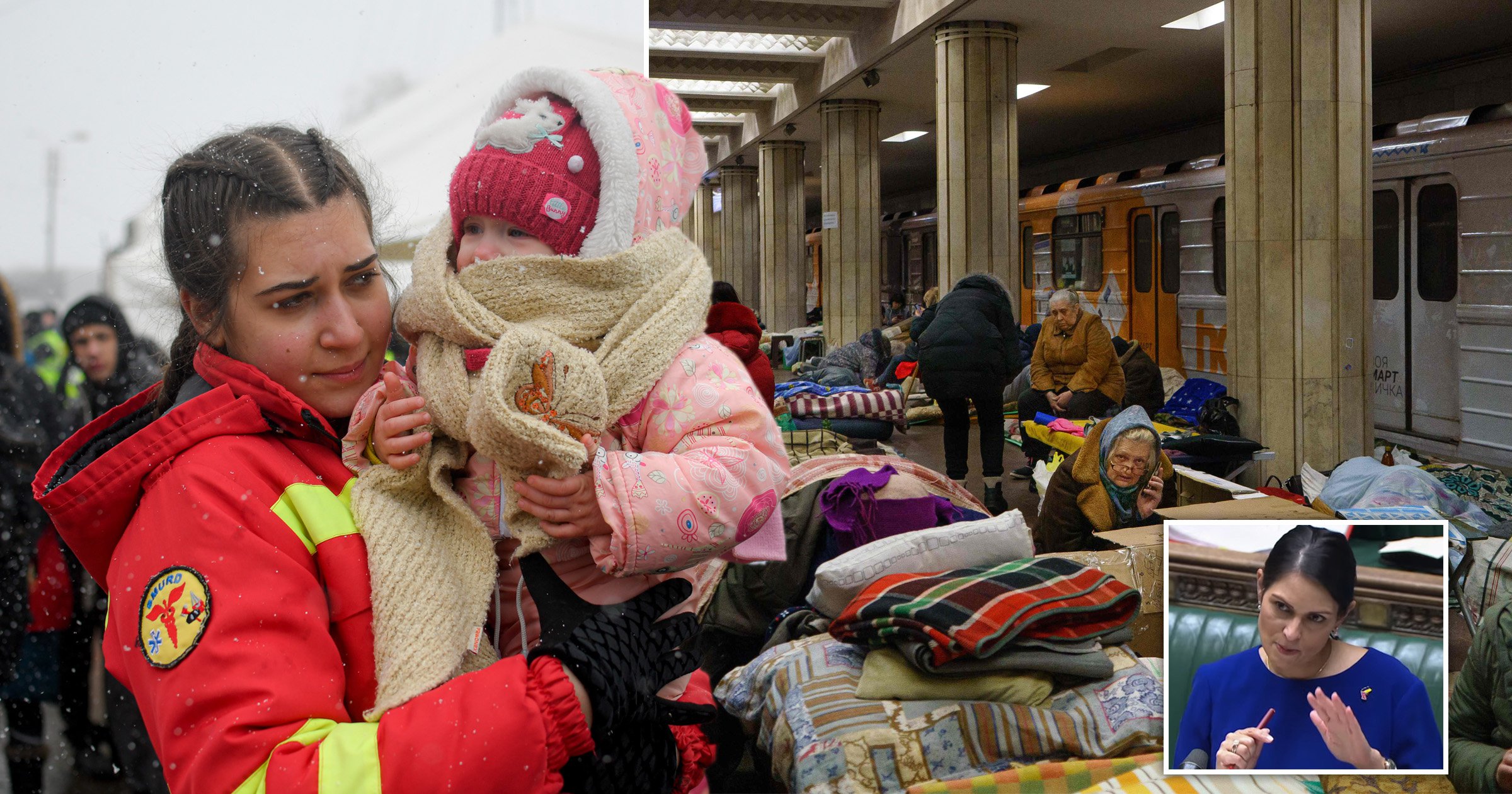 The British public will be asked to open their homes to Ukrainians fleeing Russia’s invasion of their country under new plans to be announced next week.

Levelling Up Secretary Michael Gove will set out on Monday details of a new ‘sponsored’ humanitarian route to allow Ukrainians without family links to the UK to come here.

Ministers will launch a hotline and webpage where individuals, charities, businesses and community groups will be able to offer rooms to those escaping the conflict, The Telegraph reports.

More than 2.3 million people have fled the war in Ukraine and an estimated 1.9 million are displaced within the country, a UN official said on Thursday.

Speaking to Sky News, Boris Johnson said: ‘On Monday, you’ll get from the Levelling Up Secretary, you’ll get the programme that will allow people to come in, so (if) people want to welcome (refugees) into their own homes, they can do so.’

Refugees who enter through the new route will be allowed to stay for an initial period of 12 months during which they will be entitled to work, claim benefits and access public services.

Officials will match them with offers of free accommodation from the sponsoring individuals and organisations who will be vetted to ensure it is safe and secure.

The Telegraph said those offering housing would have to agree to take the refugees for a minimum period – potentially six months – and demonstrate that they meet appropriate standards.

A Government spokesman said the details of the scheme were being worked on ‘at pace’.

‘The routes we have put in place follow extensive engagement with Ukrainian partners,’ the spokesman said.

‘This is a rapidly moving and complex picture and as the situation develops we will continue to keep our support under constant review.’

Russia-Ukraine war: Everything you need to know

Since Russia’s invasion of Ukraine began on February 24, the country has suffered widespread damages and loss of life amid a major bombing campaign.

Over two million Ukrainian refugees have fled, as cities face shortages of food, water, heat, and medicine – with some having to resort to melting snow for water.

Countries have retaliated by imposing sanctions on Russia and oligarchs such as Roman Abramovich, while large companies like Starbucks, McDonald’s, and Coca-Cola have suspended business in the country.

However, despite these economic blows, Russian President Vladimir Putin hasn’t shown any signs of calling off the attack anytime soon.

The move comes after Home Secretary Priti Patel was urged to do more to make it easier for those coming to the UK through the existing family route.

On Thursday, Ms Patel announced that from Tuesday people will be able to apply online for a visa and will no longer have to go to a processing centre to give their biometrics.

It followed criticism that the UK’s response has been painfully slow in the face of the biggest refugee crisis in Europe since the Second World War with around 2.2 million having fled the country.

However the British Red Cross said the quickest way of fixing the problem would be to remove the requirement for a visa, while the Refugee Council said Ms Patel’s announcement ‘does not go anywhere near far enough’.

Meanwhile, after the Government announced it was sanctioning seven more Russians linked to Vladimir Putin’s regime including Chelsea owner Roman Abramovich, Foreign Secretary Liz Truss said the UK and other allies need to keep up the pressure with further measures – including a freeze on all Russian banking assets.

‘We must double down and ramp up the global pressure on Putin. We must go further on sanctions to keep tightening the vice,’ she said in a speech in Washington.

‘We want a situation where they can’t access their funds, they can’t clear their payments, their trade can’t flow, their ships can’t dock and their planes can’t land.’

Her call came as Mr Johnson warned that the ‘cynical, barbaric’ Russian regime appeared to be preparing to use chemical weapons in Ukraine as its forces continued to struggle to make the expected gains in the face of fierce resistance.

‘The stuff which your are hearing about chemical weapons is straight out of the Russian playbook,” he told Sky News.

‘They start saying that there are chemical weapons that are being stored by their opponents or by the Americans, so that when they themselves deploy chemical weapons – as I fear they may – they have a sort of a maskirovka, a fake story, ready to go.’

It comes as the Ministry of Defence (MoD) warned Russia could be re-posturing for a ‘renewed offensive’ in Ukraine.

‘This will probably include operations against the capital Kyiv,’ a MoD statement said.

Earlier, the MoD said the Russian forces were committing increasing numbers to encircling key cities, reducing the forces to continue their advance which ‘will further slow Russian progress’.

Mr Johnson said that he believed the conflict would only end when Mr Putin accepted he had made ‘a disastrous miscalculation’ and withdrew his forces.

‘Vladimir Putin has himself made it very difficult to find an off ramp, and he has, I think, driven his tank, so to speak, down a cul de sac from which it will be very hard to extricate himself but he must,’ he said.

What will Boris’s new Covid plan look like? Everything you need to know