Warrant Officer Paul Carney warned that the UK military was now “shaping itself to meet the threat from Russia and was ready to counter any aggression” as Vladimir Putin continues to wage his illegal war on Ukraine. He told troops they “must be prepared for new realities” as he said now was the time to tell “families and loved ones” they could be sent to the battlefields of Ukraine.

Officer Carney, the Army’s highest ranked Warrant Officer, wrote in Soldier magazine: “I want us all to check we are physically fit for operations. And it is also important we prepare loved ones and families, who often have the hardest role in our absence.

“My ask is that you have discussions about a potential deployment with them now. Find the numbers for the support networks and the relevant people who can help them, such as the unit welfare officer and padre.

“This is key as we could be out of contact for extended periods on tour. Making sure our loved ones have the support they need is vital for us too, as we’re not going to give 10 percent on tour if we are worried about home,” according to the Mirror. 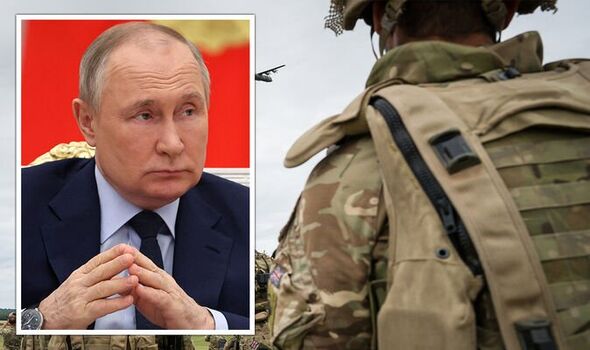 Warnings have been issued since Vladimir Putin announced Russia’s “special military operation” that the conflict could eventually spill outside of Ukraine.

Former head of the Army General Sir Richard Dannatt said it was “prudent advice” from Officer Carnery because all-out war was “realistic”.

He said: “This is prudent advice from the Army’s top soldier. It does not mean the Army is about to deploy to Ukraine but it is the duty of any army in peacetime to prepare for war, in every aspect of life.

“That said, with a war in Europe, an aggressive Russia and worried countries on Russia’s borders, it is only sensible that British soldiers are realistic about what might happen.”

It comes as explosions and fires have struck the Russian-annexed Crimea in the past week, including a blast at a Russian air base that appeared to destroy large numbers of aircraft, according to satellite photos.

Ukrainian officials have made no comment but analysts have said the attacks were made possible by new equipment used by the Ukrainian army and predicted more would occur.

President Volodymyr Zelensky referred obliquely to the incidents in Crimea in his nightly video address, saying there was anticipation in the peninsula ahead of next week’s 31st anniversary of Ukrainian independence from Soviet rule.

He said: “You can literally feel Crimea in the air this year, that the occupation there is only temporary and that Ukraine is coming back.”