A British tourist has been questioned by Italian police after she allegedly took part in a naked photoshoot in front of the majestic Amalfi cathedral.

Jemma Hopson, 29, who claims to work for West Yorkshire Police, was spoken to by Italian officers after apparently assisting her Canadian friend Savahnna Cross, 28, to strip off.

Witnesses claim that they even saw would-be influencer Savahnna walk bare-bottomed up the steps of the 900-year-old holy building.

Amalfi police confirmed the pair were reported for ‘obscene acts in a public place’ and are currently deciding if there is enough evidence for a full trial.

The local council are also pushing for a private prosecution saying that the two women brought the town into disrepute.

If found guilty they face being fined up to 30,000 Euros.

Footage of the nude photoshoot went viral after stunned locals filmed the Canadian stripping off and posing seductively.

The two were understood to be visiting the town to celebrate a mutual friend’s birthday when they decided to take the photographs, Mail Online reported. 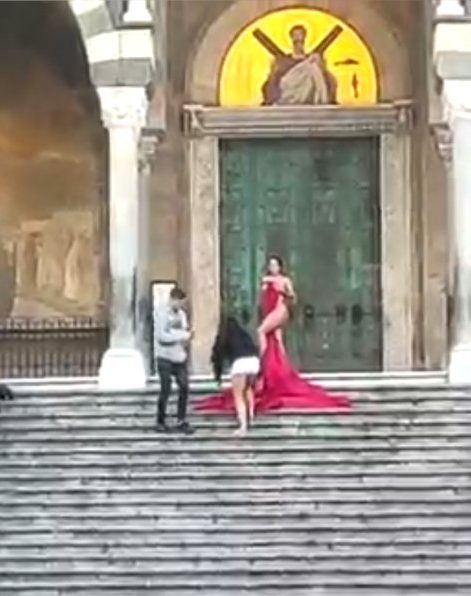 However Jemma’s mum, Janice, insisted her daughter doesn’t even know the Canadian influencer.

She told the paper: ‘This photoshoot was nothing to do with Jemma although she saw it happening because she was in the area at the time.

‘She didn’t know the girl in the pictures but saw what was happening. She said it looked as if it was some kind of modelling shoot.’

According to Jemma’s social media pages she is a forensic collision investigator at West Yorkshire Police after graduating from Leeds Beckett University.

She also lists universities in the US where she is said to have studied and previously worked as a flight attendant at Jet2 and Emirates.

‘Strong community and social services professional with a Bachelor of Science focused in sports and exercise.’

Amalfi Police said: ‘The pair were questioned and their details taken. They were a Canadian woman and a British woman. We have their details on file and the local prosecutor will decide what to do.

‘We have the image of the town of Amalfi to think of – this isn’t the sort of tourism and publicity we are looking for.’

Queen’s ‘affection’ for her dressmaker ‘not shared’ by Charles–expert

Government makes yet another humiliating U-turn on disastrous mini-Budget