Leo Varadkar today warned a no deal Brexit is looking an increasingly likely scenario the EU and Ireland will have to respond to. Pressure is mounting on Dublin to reveals its plans for the Irish border if Britain leaves the EU without a deal. But the looming threat of a hard border has done little to test the European Commission’s resolve, with eurocrats still insisting Mrs May’s draft EU withdrawal agreement will not be reopened.

Asked whether the Commission’s stance would change, a spokeswoman Brussels-based executive said: “I can confirm that.

“We will not be renegotiating the withdrawal agreement. Full stop.”

Earlier today, Mr Varadkar, the Irish prime minister, warned the rhetoric of the Tory leadership contest has made the possibility of no deal more likely.

Both Boris Johnson and Jeremy Hunt have pledged to pursue a no-deal Brexit if they cannot secure sufficient changes to Mrs May’s divorce deal. 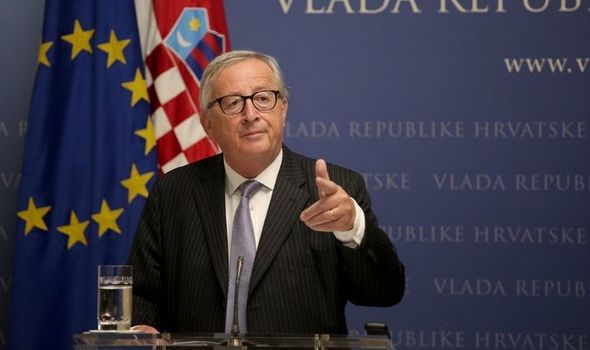 Mr Johnson vowed to leave the bloc – with or without a deal – on October 31, Britain’s scheduled departure date.

The bookmakers’ favourite said he will “do or die” and take Britain out of the bloc in four months’ time.

“We are getting ready to come out on 31 October. Come what may,” he told TalkRadio.

Asked to confirm this, he added: “Do or die. Come what may.”

In an ultimatum to Brussels to drop the controversial Northern Ireland backstop, he threatened to withhold the full £39billion divorce bill until a trade deal is agreed.

The Tory MP hinted he would defy any parliamentary efforts to block his bid for no deal Brexit.

Despite the threats, the Commission has insisted it will work with Britain’s next prime minister regardless of their position.

The Commission spokeswoman said: “The commission will work with any prime minister in the spirit of good cooperation.”

Mr Hunt was less kind towards his Tory leadership rival, whose pledge to quit on October 31 was branded “fake” by the Foreign Secretary.

In an interview with the BBC, Mr Hunt said: “Well I think that October 31 come hell or high water is a fake deadline, because it’s more likely to trip us into a general election before we’ve delivered Brexit, and that would hand the keys to Jeremy Corbyn and then we’d have no Brexit at all.

“But in my case how would I approach this. I think we’ll know very soon well before October 31. If there is a deal to be done along the basis I’ve said. If there isn’t and if no deal is still on the table I’ve been very clear. I will leave the European Union without a deal.

“But I’m not going to do that if there’s a prospect of a better deal and if I did it it would be with a heavy heart because businesses up and down the country would face a lot of destruction. I think it’d be very bad for the union, with Scotland where I was at the weekend… so I would do it though. But as a last resort.”

Covid end: Which countries will see Covid continue forever? When will Covid disappear?