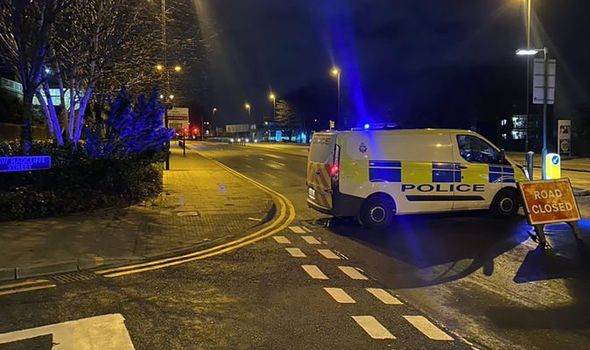 The buildings were evacuated in Oldham town centre after the incident at around 10pm. Multiple large cordons were put in place as specialist officers examined a suspicious vehicle near the police station believed to belong to the man.

He was later arrested on suspicion of criminal damage, assault of a police officer and being found on enclosed premises, Manchester Evening News says.
It is unclear if the police officer suffered serious injuries.

One man, who had been in an HFC takeaway in the area, said police stormed into the premises and told them they had to leave immediately.

He said officers ordered the shop to close and that the incident ‘looked serious’.

He said: “We were just sat at the takeaway and the next minute we see a police officer who rushed over to tell us we had to leave as soon as possible.

“He told the takeaway they had to shut immediately. It seemed really serious.

Police have said the cordons in King Street, Back King Street and George Street were all lifted earlier this morning. They said the cautions were “precautionary”.

A spokesman for Greater Manchester Police said last night: “A male gained entry to the grounds of Oldham Police Station.

“The male was arrested on suspicion of criminal damage, assault of a police officer and being found on enclosed premises. During the arrest the male was tasered.

“A vehicle found nearby is believed to belong to the man.

“A precautionary cordon is in place while the contents of the vehicle are examined by specialist GMP officers.

“A number of road closures are in place and some premises have been evacuated.”