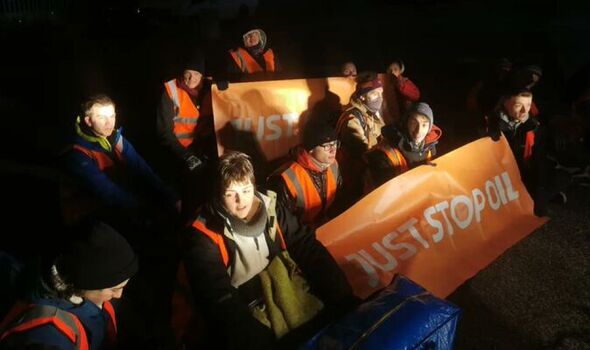 Climate group Just Stop Oil said it had blocked “key oil” terminals in London, Birmingham and Southampton from around 4am this morning.

In a series of tweets the group said a number of other locations that would be targeted by demonstrations, including Essex and Hertfordshire.

The group tweeted: “Fed up with a government burning your future – join us on the road.”

The activists are calling for the UK government to stop funding all new investments in oil, gas and coal.

Protesters were pictured sitting in the road to block oil tankers from leaving sites, while others climbed on top of the tankers.

The demonstrations have reportedly forced Exxon Mobil, one of the country’s largest privately owned underground oil pipeline distribution networks, to temporarily suspend operations at some of its sites.

Exxon Mobil has confirmed that “small protests” were taking place at their fuel terminals in Hythe, Birmingham and West London.

A statement on the groups’ website said: “The Just Stop Oil coalition is demanding an end to the government’s genocidal policy of expanding UK oil and gas production and is calling on all those outraged at the prospect of climate collapse and suffering from the cost of living crisis to stand with us.

“Ordinary people can no longer afford oil and gas, it’s time to Just Stop Oil. It’s funding war and killing people in the global south, while destroying the future for young people everywhere.”

Extinction Rebellion has said it was supporting the action.

The group said that more than 30 people climbed on top of oil tankers at the Navigator Oil Terminal in Thurrock, Essex.

Essex Police said six people had been arrested since the protests began early this morning.

The force tweeted: “We are currently dealing with three incidents in #Thurrock, where a group of people are reportedly blocking the roads.

“Six people have been arrested so far.

“It is impacting Navigator Fuel Centre, Esso in #Purfleet, and Askew Farm Lane.

“Drivers are asked to avoid the area.”

West Midlands Police are also responded to protests at a site in Tyburn, Birmingham.

The force tweeted: “We’re currently responding to activists at a site in Tyburn, Birmingham.

“We are working to deal with this as quickly as possible. Delays are expected this morning on the following roads: Wood Lane, Bromford Lane & Tyburn Road.”

“While we respect the right to peaceful protest, our priority is the safety of our people, our neighbours, the protestors and our operations.

“We are working with the police to ensure that safety is maintained. We apologise to anyone from the local community or beyond experiencing any inconvenience resulting from the actions today of this group.

“We have temporarily suspended operations from these locations. Our other terminals at Purfleet and Avonmouth are not affected. We request that the protestors allow us to resume our lawful business.”

Members of the campaign group tied their necks to goalposts at Premier League games in recent weeks to demand the government ends fossil fuel projects.

Orban and His Allies Cement Control of Hungary’s News Media

Boris 'will be gone by February', says Dominic Cummings' father-in-law