The national inspiration, who raised nearly £33million for the NHS by walking round his garden, died with the virus, aged 100. Now as we mourn his passing, the Daily Express is calling on the nation to step forward and remember him. We are asking you to take to your doorsteps tomorrow night at 8pm and mark the passing with a hearty round of applause for our beloved Capt Sir Tom.

It would be a fitting tribute to a man who raised millions for the NHS, a feat that saw him knighted by the Queen.

Capt Tom also reached number one in the music charts with a recording of You’ll Never Walk Alone with Michael Ball.

He died yesterday morning after a short battle with pneumonia and Covid.

Prime Minister Boris Johnson led tributes to the war veteran, saying: “Captain Sir Tom Moore was a hero in the truest sense of the word.

“In the dark days of the Second World War, he fought for freedom and in the face of this country’s deepest post-war crisis, he united us all, he cheered us all up, and he embodied the triumph of the human spirit.

“It is quite astonishing that at the age of 100 he raised more than £32 million for the NHS, and so gave countless others their own chance to thank the extraordinary men and women who have protected us through the pandemic. 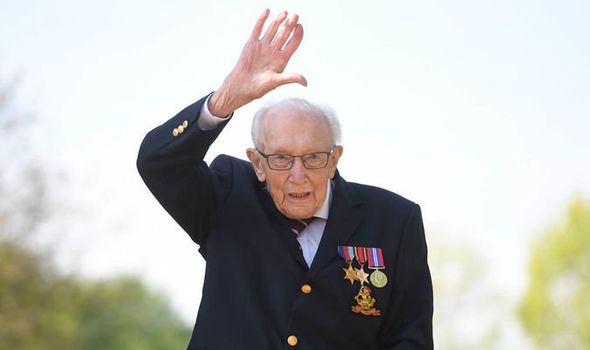 “He became not just a national inspiration but a beacon of hope for the world. Our thoughts are with his daughter Hannah and all his family.”

Mr Johnson spoke to his daughter Hannah Ingram-Moore to offer his condolences after the announcement yesterday afternoon of her father’s death at Bedford Hospital.

The flag above 10 Downing Street flew at half-mast yesterday and the same solemn tribute will be made at council buildings across the country today.

Landmarks were lit up in his honour last night including the arch at Wembley Stadium, the London Eye and Blackpool Tower.

Buckingham Palace said the Queen was sending a private message of condolence to his family.

A statement read: “Her Majesty very much enjoyed meeting Capt Sir Tom and his family at Windsor last year. Her thoughts, and those of the Royal Family, are with them, recognising the inspiration he provided for the whole nation and others across the world.” 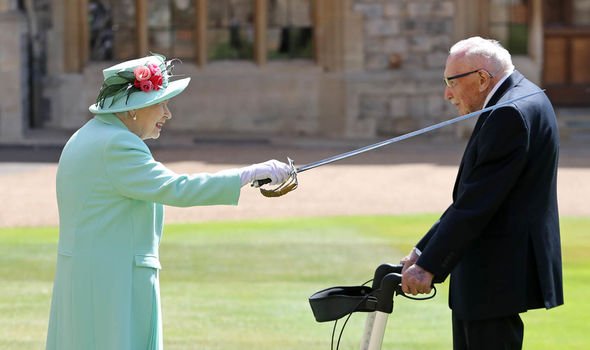 The former soldier was unknown 12 months ago but became a worldwide symbol of tenacity and hope as Covid wreaked havoc. During the height of the first wave in April last year the Second World War veteran came up with an idea to say thank you to the medics who helped save his life.

At the age of 99 he set about raising a modest £1,000 by walking 100 lengths of his garden in Marston Moretaine, Beds, before his 100th birthday.

But his daily walks with the aid of a stroller quickly saw him become an inspiration to millions and encapsulated the very best of Britain.

Capt Sir Tom had fought pneumonia and Covid for 11 days but the drugs he was being given for pneumonia meant he could not receive a vaccine jab.

He was able to see Hannah and his loving grandchildren Benjie, 16, and Georgia, 11, hours before he died yesterday.

His daughters Hannah Ingram-Moore and Lucy Teixeira said in a statement: “We are so grateful that we were with him during the last hours of his life. 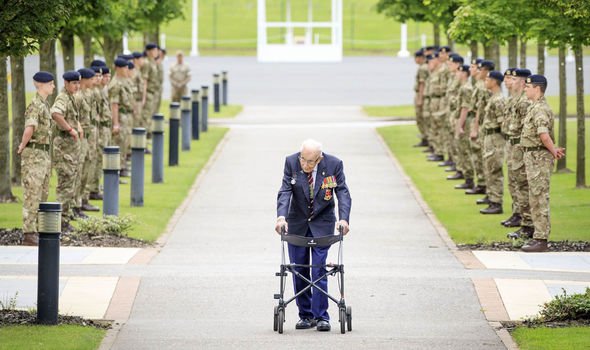 “We spent hours chatting to him, reminiscing about our childhood and our wonderful mother. We shared laughter and tears together.

“The last year of our father’s life was nothing short of remarkable. He was rejuvenated and experienced things he’d only ever dreamed of. Whilst he’d been in so many hearts for just a short time, he was an incredible father and grandfather, and he will stay alive in our hearts forever.”

During the past five years Capt Sir Tom had been receiving treatment for prostate and skin cancer but made the decision not to have invasive treatment.

He and his family were gifted a five-star trip to Barbados on December 11, which he described as a bucket list item ticked off. They returned to Britain on January 6.

He was admitted to hospital on January 12 and was diagnosed with pneumonia. On January 22, the day he was discharged, he tested positive. He was taken by ambulance to Bedford Hospital on Sunday.

Born in Keighley, West Yorkshire, in 1920, the decorated hero served with distinction in the Second World War. 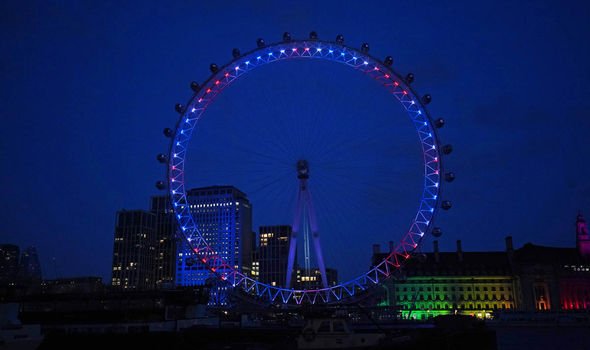 He was conscripted in 1940 and posted to India before joining the fight in Burma.

Capt Sir Tom lived in Kent for many years but, after the death of his wife Pamela in 2006, moved in with his daughter Hannah, her husband Colin and their children. Tributes poured in from around the world yesterday.

A tweet from the White House said: “We join the United Kingdom and the world in honouring the memory of Captain Sir Tom Moore, who inspired millions through his life and his actions.”

The NHS simply said: “Thanks for everything, Capt Sir Tom.”

Michael Ball wrote on Twitter: “Rest in peace Capt Sir Tom. A wonderful life so well lived and a hero and fighter to the very end.”

The singer said he had spoken to Hannah. He added: “She described the last few days. They spent the time with him in hospital. He was so proud and so content and he didn’t suffer.” 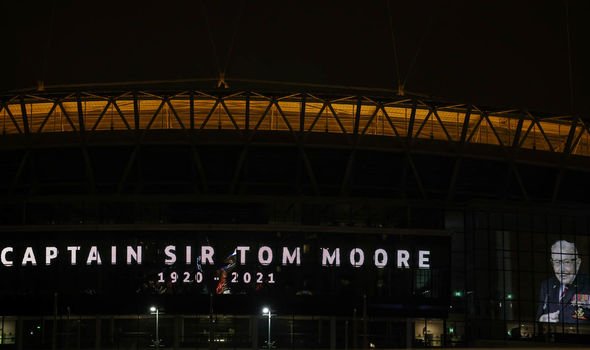 In an interview with the Daily Express, his favourite newspaper, Capt Sir Tom had said he wanted his achievements to be the catalyst for everyone to appreciate the heroes of the NHS frontline.

He said: “I hope we continue to recognise and support our frontline heroes of the National Health Service and indeed all the key workers who have worked so tirelessly to see us through these recent months. Tomorrow will be a good day.”

In July, he was knighted by the Queen in a specially arranged outdoor ceremony and later released his life story and a children’s book.

Proceeds from his extraordinary exploits supported the launch of the Captain Tom Foundation, a charity to help the causes closest to his heart.