Home » Europe » Camilla, Kate and Sophie on brink of tears as Queen lies in state

Queen Camilla, the Princess of Wales and the Countess of Wessex could be seen growing emotional as they watched the Queen lying in state. The three women were accompanied by other royal members like Prince William, Prince Harry, and the Duchess of Sussex. After making her final journey through the streets of London from Buckingham Palace, Her Majesty is now lying in state in Westminster Hall.

The three women struggled to hold their tears back, as they watched the Queen lying in state.

The late Queen had just made the journey from on a gun carriage of the King’s Troop Royal Horse Artillery, with the King and members of the Royal Family walking behind.

The Queen Consort, Kate and Sophie travelled from Buckingham Palace by car alongside Meghan, the Duchess of Sussex.

They then rejoined their respective partners inside Westminster Hall for a brief service led by the Archbishop of Canterbury. 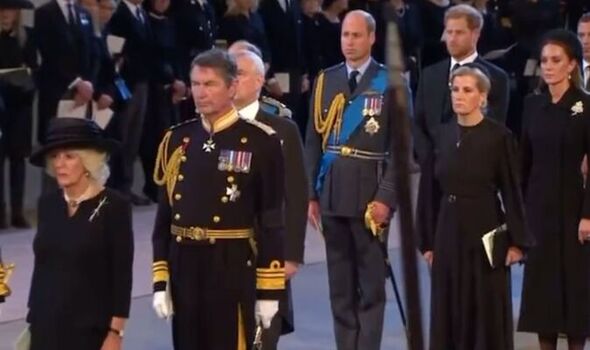 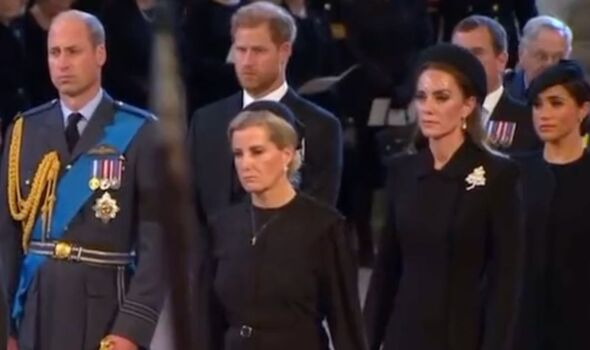 The Queen’s coffin rested in Buckingham Palace’s Bow Room overnight on her final night in the Palace.

In her final journal through the streets of London, Her Majesty’s coffin was transported to Westminster Hall, passing by St James’ Park, The Mall, Horse Guards Parade, and Whitehall.

While it was grey this morning in London, the sun poured through the windows of Westminster Hall when the Queen’s coffin came in.

The Queen is now lying in state, meaning members of the public will be able to view the Queen’s coffin in London’s Westminster Hall from 5 pm. 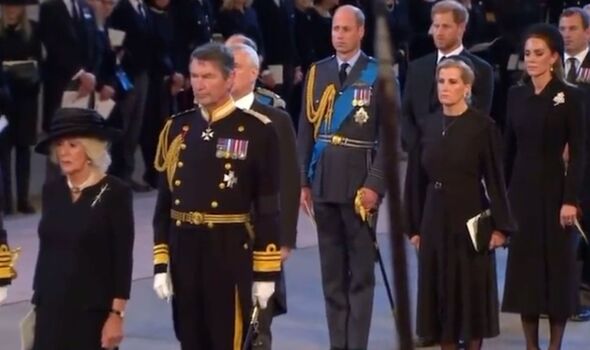 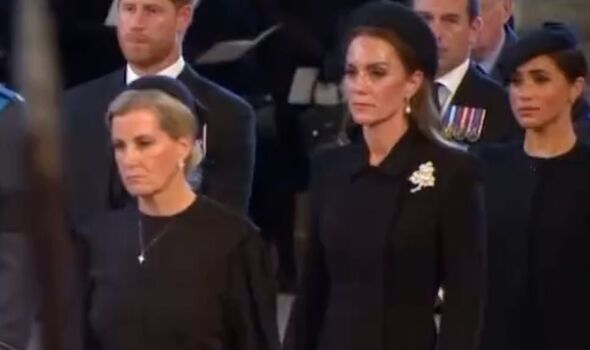 The queue of people waiting to pay their respects to the late monarch is reportedly strecthing for 6.9 miles at the time of writing.

More people are expected to join in over the next four days, with a strict queueing system in place to monitor access to the Queen’s coffin.

During the lying in state period, the hall will be open 24 hours a day for members of the public to walk past the coffin and pay their respects.

The lying in state period will extend until next Monday, when the funeral service will take place.

Mr Khan told CNN: “We expect to see over the course of the next few days hundreds of thousands of people personally pay their respects to her majesty the Queen, but also we expect to see prime ministers, presidents, members of the royal family, and others from across the globe.”

READ NEXT:
Heartbreaking reason of riderless horse at front of Queen’s procession
Paramedics swoop in as royal mourner collapses at coffin procession
Meghan wears pearl earrings given to her by Queen at procession
Kate Middleton radiates elegance with Queen Elizabeth’s diamond brooch
William and Harry ‘working to rebuild relationship’ in Queen tribute

Prince Andrew could return to public life after Philip memorial: ‘Still has a lot to offer