King Charles and Camilla leave the Houses of Parliament

Queen Consort Camilla’s hands were spotted shaking on live television as she signed the visitor’s book at the Scottish Parliament. She could be seen firmly gripping the pen as she marked her signature in the book. Both King Charles III and his wife signed the book, described as “important for the archives of the Parliament”. 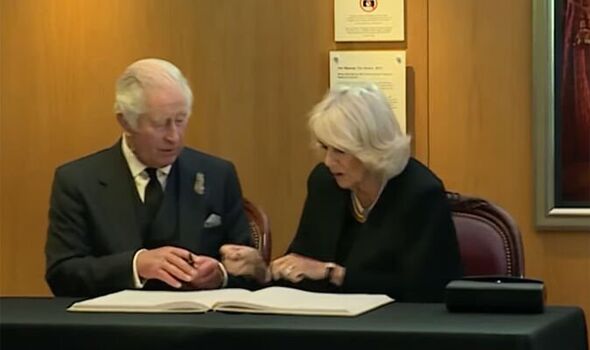 A portrait of the Queen was seen behind the couple, looking down on them.

The portrait of the late monarch was commissioned by the Scottish Parliament to mark its 10th anniversary.

It is not the first time that Camilla’s shaking hands has prompted concern.

Back in March, royal fans were left concerned after noticing the Queen Consort’s shaky hand at an event for International Women’s Day (IWD).

The signing followed an emotional ceremony in Holyrood, where the Scottish Parliament issued a motion of condolence.

Responding to the motion, Charles said: “My mother felt as I do, the greatest sense of admiration for the Scottish people.”

COVID: When will the UK ‘transition from pandemic to endemic’ – and how would we learn to live with coronavirus?