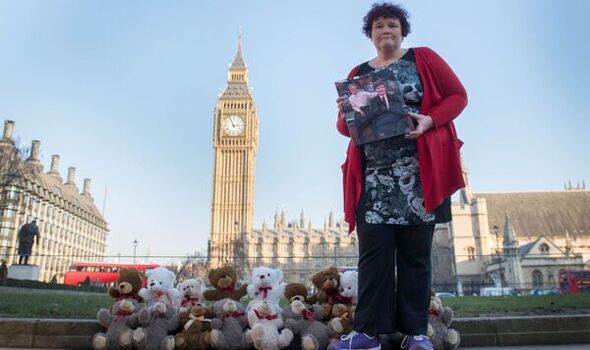 The Daily Express End This Injustice crusade changed the law through the Domestic Abuse Bill to shake up the court system.

But a report has revealed there are still families slipping through the net since legislation in April last year.

There is progress, says a Women’s Aid report, but more still needs to be done.

Claire Throssell MBE, Child First Survivor Ambassador, suffered the devastating loss of her sons Jack, 12, and Paul, nine, who were killed in a house fire started by their father Darren Sykes.

She said: “In 2016, when the Child First campaign was launched, my two precious sons, Jack and Paul, were included in the tally of 19 children and two women who had been murdered by a perpetrator of domestic abuse in circumstances of child contact.

“The Harm Report was published in June 2020 and the Domestic Abuse Act was given Royal Assent in 2021. Yet the reality is that victims and survivors are still experiencing the same traumatising and humiliating treatment I suffered in 2014.

“Within the family court system, there remains inequality, injustice, fear and oppression.

“Too often, perpetrators are shielded because practice directions and guidance that were created to project children are not working effectively.

“There is still too much insistence on parental rights and a deafening silence about the rights of a child.

“Urgent action is needed to prevent other parents having to exist like me.”

She added: “I promised my precious sons as I held them as they died, that no more children should have to die at the hands of someone who should love and protect them the most.

“This is why I support the report published by Women’s Aid today and hope that its recommendations will be followed.”

Under the charity’s Child First campaign they want to ensure the safety of children in all cases within the family court system are put first.

Since 1974, Women’s Aid has been working to end domestic abuse against women and children.

Farah Nazeer, chief executive of Women’s Aid, said: “The current system, based on misogyny, victim-blaming, and a lack of understanding trauma is as tragic as it is unacceptable: we must show women and children that they will be listened to, believed and supported.

“We call on the government to ensure the Harm Panel recommendations are actioned as a matter of urgency – there can be no further delay.

“We are ready and willing to work with agencies and organisations across the family courts system to ensure progress: only by working together can we achieve the results we need.

“We know that the implementation of the Harm Panel report can deliver real change, and at Women’s Aid, we will not stop campaigning until all women and children are safe.”

The End This Injustice campaign also fought for threats to share intimate images, post-separation abuse and non-fatal strangulation to become standalone offences under the Domestic Abuse Bill, which saw them to become criminalised.

‘Our most common call is shootings or stabbings’: A night with London’s Air Ambulance