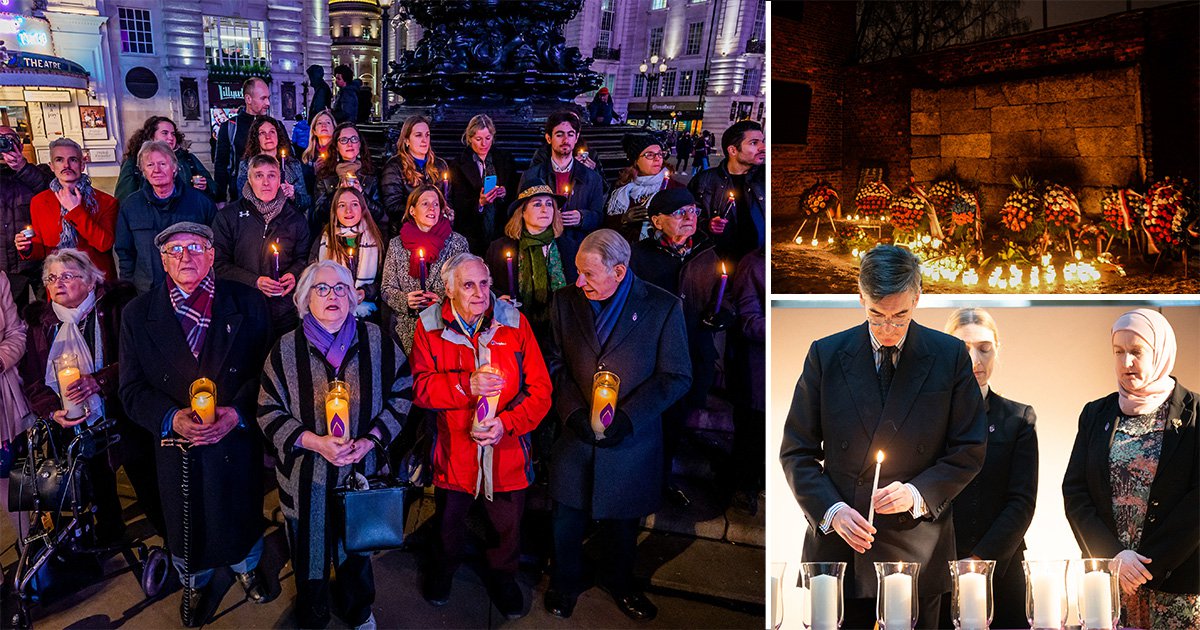 Candles have been lit across the UK to mark the 77th anniversary of the liberation of Auschwitz, and remember those who have lost their lives in genocide.

Today is Holocaust Memorial Day, set up to commemorate the six million Jewish men, women and children who were murdered by the Nazis during World War Two.

They attempted to wipe out all the Jews in Europe, along with others who their ideology did not accept such as Roma and Sinti people, disabled people, gay people, and political opponents.

The day, held annually on January 27, also commemorates lives lost in other sickening genocides including those in Rwanda, Cambodia, Bosnia and Darfur.

A group of nearly 30 survivors and their families stood on the steps of Piccadilly Circus holding flickering candles.

The group looked up at the junction’s giant billboards, where portraits of them and fellow survivors were displayed.

A film was also screened showing people, including leaders from politics and religion, lighting candles to mark the day.

One of the photographs, taken by the Duchess of Cambridge, showed survivor Steven Frank.

Born in the Netherlands, Mr Frank was one of only 93 children who survived the Theresienstadt ghetto camp out of the 15,000 children who were sent there.

His father, an eminent lawyer, was active in the Dutch resistance when the country was under Nazi occupation.

Mr Frank, now in his late 80s, said: ‘And then one day he went to the office to go to work, and he’d been betrayed, and he was taken away.

‘So he ended up in prison, where we know he was tortured, badly beaten, from where he was taken to Westerbork, and from Westerbork to Auschwitz, where he was murdered in the gas chambers on January 21 1943.

The portrait of Mr Frank showed him with a pot, in tribute to his mother who, while working in Theresienstadt, collected crumbs that she made into a paste to feed to her children.

People were asked to display candles in their windows at 8pm to ‘light the darkness’.

National landmarks also lit up in purple, including the London Eye, the Houses of Parliament, the Natural History Museum and Cardiff Castle.

Olivia Marks-Woldman, chief executive of the Holocaust Memorial Day Trust, wiped tears from her eyes as she spoke of the event’s significance.

She said: ‘Holocaust Memorial Day is such an important day for everybody in the country to come together and we’re doing so at a time when the world can feel quite fragile and we can feel quite vulnerable to division and hostility.

‘We only saw yesterday an antisemitic attack with two people being assaulted.

‘And that can leave people feeling particularly vulnerable, so to be able to come into the heart of London, into Piccadilly Circus and see photographs of Holocaust survivors in enormous displays, and to be able to celebrate the lives they have rebuilt in Britain just feels a very profound moment.’

Laura Marks, chair of the Holocaust Memorial Day Trust, spoke of the meaning of this year’s theme, ‘One Day’.

She said: ‘One day is Holocaust Memorial Day, one day Bergen-Belsen was liberated.

‘One day each of our survivors got out or their parents were taken away.

Meghan Markle and Prince Harry security costs: Who will pay as couple move to LA?