The 100-year-old war hero was taken to hospital on Sunday after being treated for pneumonia for some time and testing positive for COVID-19 last week. In a statement released this evening, Bedford Hospital confirmed the veteran fundraiser is still being treated at the ward and his family are with him.

In the update, released with the agreement of his daughters Hannah Ingram-Moore and Lucy Teixeira, the hospital said: “Bedford Hospital continues to care for Captain Sir Tom Moore.

“At this time members of Captain Tom’s family are with him.

“We respectfully request that media give the family space and privacy and do not contact them directly so they can focus on their father, grandfather and father-in-law.”

On Sunday, the family confirmed he was taken to hospital after suffering breathing difficulties. 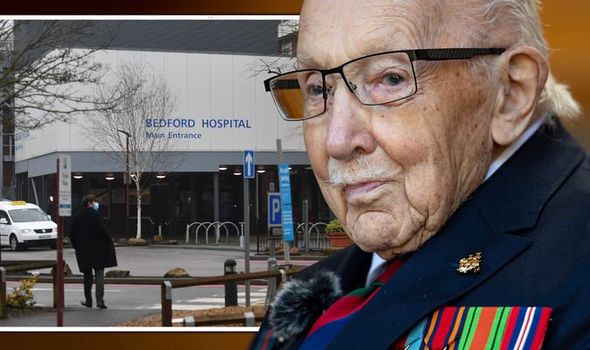 In the statement released by his daughter Hannah, she also confirmed he was being treated in ward and not an Intensive Care Unit (ICU).

They also thanked the staff at the hospital and hoped Captain Tom would be home as soon as possible.

The statement added: “The medical care he has received in the last few weeks has been remarkable and we know that the wonderful staff at Bedford Hospital will do all they can to make him comfortable and hopefully return home as soon as possible.

“We understand that everyone will be wishing him well.

“We are of course focussing on my father and will update you when we are able to.”

Prime Minister Boris Johnson has led the good-will messages to Captain Tom and said he has been in contact with the family.

During a visit to northern England this afternoon, he said: “I spoke to the family last night, and all I can say is Captain Tom Moore has been an inspiration to everybody in this country during this pandemic.

“Our thoughts and our prayers are now with him and with his family.

This is a developing news story, more to follow.