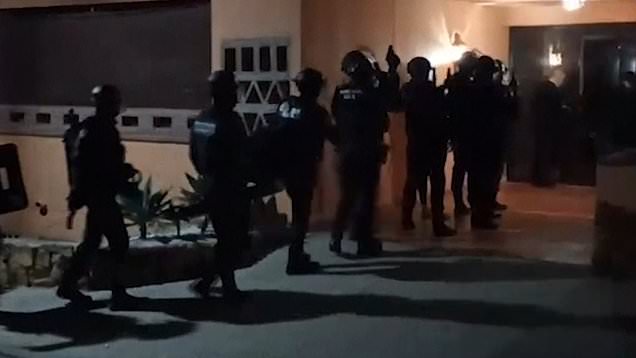 A ‘super cartel’ that supplies a third of Europe’s coke has finally been busted.

More than 30 tonnes of drugs with a street value of £2.7 billion were seized in the Netherlands, Spain, France, Belgium, and the UAE.

The European Union crime agency confirmed 49 suspects have been hunted down as part of the so-called ‘Operation Desert Light’, including six ‘high-value’ targets in Dubai.

Police targeted both the ‘command-and-control centre and the logistical drugs trafficking infrastructure in Europe’.

Europol released footage from the latest series of raids, which took place between November 8 and 19.

At least 30 officers can be seen forcing entry into a property in the middle of the night.

Another clip shows several men being taken led away from a home in handcuffs.

The US Drug Enforcement Administration also played a role in bringing down the organisation, which was also involved in money-laundering.

‘The scale of cocaine importation into Europe under the suspects’ control and command was massive,’ Europol said.

The agency added that the suspects used encrypted communications to organise drugs shipments.

The Netherlands was the country where most of the arrests were made, with 14 in 2021.

Dutch authorities said one of the suspects arrested in Dubai allegedly imported thousands of kilos of cocaine into the Netherlands in 2020 and 2021.

The 37-year-old man with both Dutch and Moroccan nationality is also being prosecuted for laundering large amounts of money and possession of firearms.

A 40-year-old Dutch-Bosnian citizen was also arrested in Dubai following an investigation based on intercepted Sky messages.

He is suspected of importing cocaine and raw materials for the production of amphetamines into Europe.

More than 214 tonnes of cocaine were seized in the region in 2020, a 6% increase from the previous year.

Experts from the European Monitoring Centre for Drugs and Drug Addiction believe that amount could reach 300 tonnes in 2022.