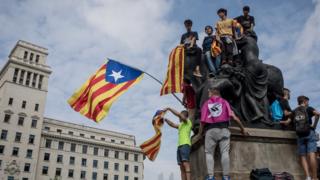 Catalonia’s drive for independence plunged Spain into its biggest political crisis for 40 years.

The region had its autonomy suspended for almost seven months by Madrid after a failed bid to break away.

Catalonia is a semi-autonomous region in north-east Spain with a distinct history dating back almost 1,000 years.

The wealthy region has about 7.5 million people, with their own language, parliament, flag and anthem.

Catalonia also has its own police force and controls some of its public services.

Catalan nationalists have long complained that their region sends too much money to poorer parts of Spain, as taxes are controlled by Madrid.

They also say Spain’s changes to their autonomous status in 2010 undermined Catalan identity.

In a referendum on 1 October, declared illegal by Spain’s Constitutional Court, about 90% of Catalan voters backed independence. But turnout was only 43%.

There were clashes when Spanish national police tried to prevent people voting.

The ruling separatists in the Catalan parliament then declared independence on 27 October.

Angered by that, Madrid imposed direct rule by invoking Article 155 of the constitution – a first for Spain.

Carles Puigdemont, the former Catalan president, fled but is wanted in Spain accused of rebellion, as are four who fled with him. Two of his ex-ministers are in prison in Spain.

In June 2018, Catalan nationalists regained control of the region from Madrid’s direct rule after a new government was sworn in.

Quim Torra, a close ally of Mr Puigdemont, will lead the regional government.

16% of Spain's population live in Catalonia, and it produces: