MADRID — The simmering conflict over Catalan independence roared back to the center of Spanish attention on Tuesday, as 12 people went on trial for their roles in the botched secession attempt of 2017, and Prime Minister Pedro Sánchez scrambled to keep the issue from toppling his government.

The eagerly anticipated trial before the Spanish Supreme Court in Madrid has drawn enormous attention and is being broadcast live on national television, but it could soon be overshadowed by the political crisis unfolding just blocks away, in Parliament.

On Wednesday, Mr. Sánchez’s minority Socialist government faces a crucial parliamentary vote on his national budget. If a majority of lawmakers reject it, including Catalan lawmakers who have so far backed the prime minister, he will almost certainly be forced to call elections.

With Spain’s government hanging in the balance, the Supreme Court is under intense pressure to demonstrate that it can remain impartial and above politics in a case that has ignited passions and recriminations. The Catalan separatist leaders were indicted on charges that include rebellion, after holding an independence referendum and then declaring independence in October 2017 — moves the Spanish courts ruled unconstitutional.

The secessionist conflict has split Catalan society, but it has also helped reshape Spain’s politics. Mr. Sánchez came into office unexpectedly in June, after winning a vote of no-confidence against the previous conservative government, with the backing of Basque and Catalan nationalist lawmakers. 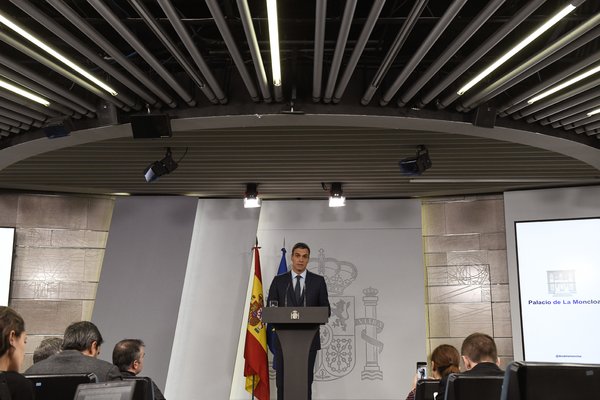 To stay in office, he needs to maintain the support of the separatist parties that have governed in Catalonia, the wealthy northeastern region of Spain, since 2015. But Quim Torra, the leader of the regional government, has insisted that his party would not back the national budget unless Mr. Sánchez agreed to consider another independence referendum, which the prime minister has refused to do.

On Tuesday, María Jesús Montero, Spain’s budget minister, told lawmakers that the trial and conflict over Catalonia had “polarized” the debate over the budget, but insisted that “this government will not cede to any blackmail” from separatist lawmakers.

Mr. Sánchez’s attempt to renew political dialogue with the separatists was recently labeled as treason by the leader of Spain’s conservative party, Pablo Casado.

Almost every aspect of the criminal case has been the subject of intense political feuding, from the location of the trial — in Madrid rather than Barcelona — to the decision by Spain’s judiciary to deny bail for most of the defendants and to keep them in prison since late 2017.

The defendants’ supporters see the conditions as reinforcing the independence movement’s complaints about an oppressive central government. Opponents of secessionism, on the other hand, hope that prison sentences for Catalan leaders will deter illegal attempts to break up Spain.

Within the main chamber of the frescoed Supreme Court building, which was built in the 18th century, a panel of seven justices and the 12 defendants listened to opening arguments on Tuesday. Oriol Junqueras, the former deputy leader of Catalonia, occupied the frontbench.

Andreu Van den Eynde, a lawyer for Mr. Junqueras who opened the proceedings, cast the case as a matter of free expression, the right to protest and the right to vote.

“We will not make a political defense, but we will defend human values and rights,” Mr. Van den Eynde said. The defendants, he argued, have already faced legal proceeding in which “every constitutional right has been restricted.”

A handful of indicted politicians are missing from the trial, however, including Carles Puigdemont, the former leader of Catalonia, who fled to Brussels and has successfully resisted Spain’s attempts to extradite him.

Outside the Supreme Court building, television crews under heavy police surveillance jostled for space; some 600 journalists have been accredited to cover the trial.

In the surrounding streets, a few protesters, some of whom carried Spanish flags, denounced Mr. Sánchez for his handling of the Catalan conflict and called for his ouster — a small echo of the anti-government demonstration that drew tens of thousands of people on Sunday.

“I rely on the judges to do what the politicians haven’t done and put an end to any attempt to destroy Spain,” said Santiago Pulido, a house painter, who held a sign with a drawing of two defendants with devil’s horns.

Some of the defendants face up to 25 years in prison if found guilty, but the sentences should be “much heavier,” Mr. Pulido said. “They are responsible for dividing the Spanish people and making people fight each other within their own country — I cannot think of a more serious crime.”

The trial is expected to last at least three months. But budgetary defeat on Wednesday could force Mr. Sánchez to call elections before the summer, which means they could take place before verdicts are made public.

Opposition politicians want Mr. Sánchez to hold a general election on May 26, when Spain is already to hold municipal and regional elections, as well as votes for the European Parliament.

Speaking outside the courtroom, Mr. Van den Eynde, the defense lawyer, said a trial that he views as already politicized could be influenced by a snap election.

“We’re trying to stay focused on this trial,” he said, “but we know that when politics change, everything can change.”

Princess Beatrice wedding: The REAL reason Beatrice wants to get married so quickly