A slowing rate of hospitalisations requiring intensive care may mean the peak of Italy’s crisis is within sight. 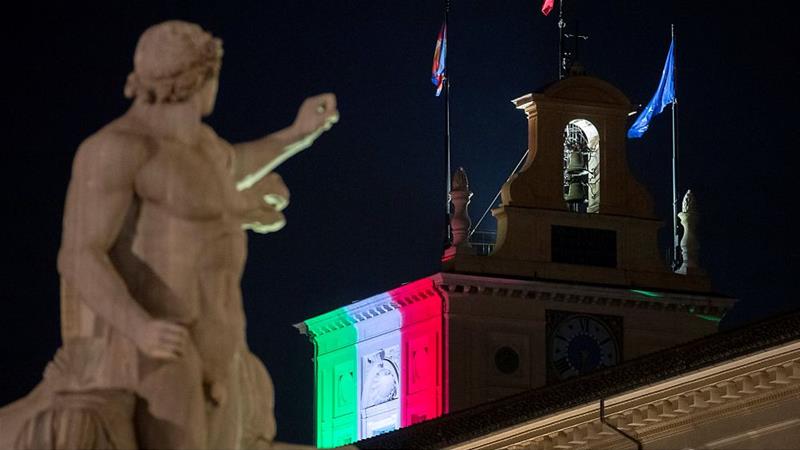 Turin, Italy – Initial signs of a slowdown in Italy’s coronavirus epidemic, the world’s deadliest, have started appearing across the country in recent days, say officials, providing a beacon of cautious hope to other Western nations where authorities are implementing similar containment strategies – but where the infection rate is still growing fast.

Following a national lockdown that began on March 10, Italy has become an international litmus test to understand the dynamics of the virus’s spread, and the relative success of strict measures to stem the contagion. Though statistics vary, many hard-hit countries could be around three weeks behind Italy in their domestic infection spread.

Similar rates of growth in total cases have been recorded in Italy over the past five days, shifting between a maximum of 5.6 percent and a minimum of four percent, showing a tentative steadying of the contagion curve.

Silvio Brusaferro, president of the National Institute of Health, told a press conference on Tuesday that the country seemed to be arriving at a plateau, showing that the movement restrictions were working. He also hinted at the possibility of having reached a peak in the contagion.

Although experts mostly agree there are some initial signs of improvement, they still warn that official numbers could be failing to provide a clear picture of the overall situation.

“Technically, the peak is the day when the highest number of daily infections is reached,” Nino Cartabellotta, a leading Italian public health expert, told Al Jazeera.

“After March 21, when Italy had a high of 6,500 cases, we witnessed a decrease. We are now in a sort of a plateau, where numbers still go up and down, since they also depend on the number of tests conducted on a daily basis. This might last up to three weeks, when a [decrease] should begin.”

But based on the different virus transmission rates seen across Italy’s varied regions, and with discrepancies in testing policies, Cartabellotta says discussing a contagion peak in Italy was like talking about a fabled phoenix.

“The number of infected patients [announced] depends on the daily changes in the number of tests, meaning this figure cannot be taken as an objective measure. [It is like] looking through a keyhole that keeps constantly changing in size,” he says.

Experts say the number of infected people in the country is certainly higher than has been announced, as the vast majority of tests have only been conducted on people who have been hospitalised, leaving infected citizens with no or few symptoms uncounted.

Meanwhile, officials said on Tuesday the number of deaths could have also been underestimated, since their data did not include the deaths of people who died at home or in nursing homes. In Bergamo, the city in Italy most badly affected by the infection, fatalities in the first three weeks of March increased more than four times compared with the same period in 2019.

But more positive signs have also emerged this week, with the rate of hospital admissions starting to slow, alongside a decline in the number of patients in need of intensive care in some of the country’s worst-hit areas.

A doctor working in a COVID-19 ward at a hospital in Cremona, one of the provinces most affected by the crisis, told Al Jazeera that the number of patients who were hospitalised with serious infections had slightly decreased since the weekend, along with the number of ambulance service interventions.

Virologist and University of Florida Professor Ilaria Capua, a former Italian MP, told Al Jazeera she felt “cautiously optimistic”, although she also acknowledged that an overall statement about the course of the epidemic was difficult to issue in light of the different sampling procedures carried out in different Italian regions.

“I am beginning to feel optimistic because recent data are showing that there is no significant increase in the number of deaths or in severe clinical forms that require hospitalisation,” she told Al Jazeera. “The biggest problem of this pandemic is the overload of the healthcare services. The number of hospitalisations is not significantly increasing, meaning that the restriction measures that were put in place are actually working. Therefore, we are hopefully stabilising before the epidemic curve starts decreasing.”

Capua said the epidemic curve might also be impacted by the growing presence of antibodies across society. Those people who have been affected by an asymptomatic or mild form of COVID-19 should have in fact produced antibodies, which are one of the likely barriers to the transmission of the virus, contributing to the effects of the restriction measures.

But if Italy relaxed now, it could still witness new peaks.

Officials say a full lockdown will continue until at least Easter (April 12), while many are already expecting further extensions.

Cartabellotta warns that it could be potentially very dangerous if politicians start discussing what to do next and ways to reopen the country while basing their assumptions on the way their numbers are currently being recorded.

He also urged more clarity concerning the category of people authorities define as “recovered/discharged”. As of Thursday, 18,278 individuals fall into this category.

It was not specified whether all those in this category underwent the double testing the World Health Organization requires for a case to be declared closed. The Italian health agency considers a case closed when someone heals and ceases to be contagious. Often, people who were discharged were not tested twice, meaning they could still be potentially contagious, or active cases.

“We are at risk here of letting people out who shouldn’t go around,” Cartabellotta says.

At the same time, more guidelines from European officials are needed to standardise metrics in measuring the contagion, thus helping scientists research and plan for the next steps to be rooted in scientific analysis.

Male individuals also appear more likely to develop severe clinical cases of COVID-19 in Italy, and preliminary data suggest a similar scenario in other countries, though that requires more data and standardised methods to confirm.

Researchers aren’t sure what’s behind this apparent trend, but Capua says this preliminary evidence could represent a stepping stone as we head towards “the new normal”, knowing it could represent a criterion to enact measures for the next phase of the emergency.

“If these data are confirmed, it would seem wise to start repopulating the workforce with a higher number of women than men initially,” she said. “Because if women are more resistant, they’ll have a tendency to get less seriously affected, and therefore they won’t be another burden on the healthcare system.”