BERLIN — When Germans elect a new government in September, they will face a unique opportunity to change the direction of their country.

A day after the two leading parties, the Christian Democrats and the Greens, each settled on who they will send into the race to replace Chancellor Angela Merkel, the contours of exactly what is at stake have begun to take shape.

They are reflected in the biographies of the top candidates, who split not just across political lines, but generations and their vision for the future. Annalena Baerbock of the Greens is a 40-year-old woman with no experience in government who promises a new start. She’s facing off against Armin Laschet, a 60-year-old governor from Ms. Merkel’s party who prides himself on continuity with the chancellor’s policies.

“Are Germans really ready to get out of their cocoon of the last 16 years,” said Sudha David-Wilp, a trans-Atlantic fellow with the German Marshall Fund in Berlin. “Are they really ready to meet head-on the kinds of challenges the Greens want to take on, like digital and energy transformation?”

While the Christian Democrats remain the strongest political force in the country, their socially conservative, pro-free market brand, rooted in traditional Christian values, has been badly battered by an inability to manage the latest waves of the coronavirus, a vaccine rollout plagued by a shortage of doses and an emphasis on bureaucratic detail over getting shots in arms.

Then, as Germans were wondering when they could get vaccinated and whether the schools would be forced to close yet again, a fierce battle broke out between Mr. Laschet, and his counterpart in the conservative party’s Bavarian branch, Markus Söder, who enjoyed stronger popularity in the polls. 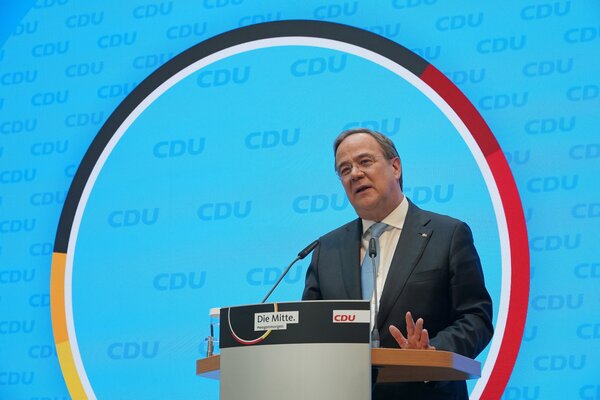 For a week, instead of focusing on changes to a law governing the pandemic, which Ms. Merkel insisted were needed to ensure the country could beat back a dangerous third wave, the conservatives were consumed with the battle between the two leaders.

Mr. Söder agreed to back down after senior conservatives threw their weight behind Mr. Laschet. But Mr. Laschet will now have to focus on reuniting the conservatives at a time when his disapproval rating in his home state stands at 69 percent.

In his acceptance speech on Tuesday, Mr. Laschet painted a vision of Germany as a diverse country, where everyone has a chance to follow their dreams, but gave few details of how the future would look. Instead he focused on the need for unity and rebuilding trust, both among conservatives and with voters.

“The C.D.U. has never been a party of ideas,” said Christian Odendahl, chief economist at the Center for European Reform, referring to the Christian Democratic Union by its initials. “Does the C.D.U. even have a vision for the future of Germany?”

Without a clear vision, the conservatives risk losing young voters, many of whom have only really known a Germany led by Ms. Merkel. The conservative youth wing, which had backed Mr. Söder, chastised the Christian Democrats and their candidate, including for their chaotic video conference that began Monday evening and ended early Tuesday morning with the choice of Mr. Laschet.

“This ability is needed now more than ever,” the group said in a statement of the need to unify. “Because yesterday evening’s image was not that of an election winner, and we can’t go into the election campaign like that — in terms of organization and internal party dealings.”

Ms. Baerbock, by contrast, has her party fully behind her. She was chosen over her more experienced, male co-leader — gender parity, including a male-female leadership duo, is one of the Greens’ core policies. In her acceptance speech, she addressed the need combat climate change, and reshape the country’s political systems to meet the needs of Germans in the 21st century.

With a background in climate and human rights law, she is known as a strong networker and someone whose focus is on the people she represents. In her speech, she painted herself as a candidate who has only known a reunified Germany. She was open about her lack of experience in office, but cast it as an opportunity for a country that has been under the same management for a decade and a half.

“A Green candidacy for chancellor stands for a new understanding of political leadership,” Ms. Baerbock said. “Decisive and transparent, capable of learning and self-critical. Democracy thrives on change.”

Although the two leading candidates are the strongest contenders for the race, Germany’s finance minister, Olaf Scholz, 64, is also in the running for the Social Democrats. Traditionally the rivals of the Christian Democrats, with an emphasis on a strong safety net, the party has spent the past eight years relegated to being a junior partner in the chancellor’s governments.

But in the wake of the coronavirus crisis, which has seen the government break its balanced budget to pay for 1.3 trillion euros, or $1.6 trillion, in compensation for the lockdowns and vaccines, the party could gain support with a smart campaign focused on social justice and Mr. Scholz’ willingness to spend to keep people afloat.

With the conservatives polling just below 30 percent, the Greens hovering just above 20 percent, followed by the Social Democrats at around 18 percent, what seems clear is that whichever party wins the election will have to build a coalition to govern.

One idea has been that the Greens would become the junior partner in a conservative-led government that would be more environmentally focused than the coalitions of the conservatives and Social Democrats led by Ms. Merkel, but still heavily influenced by the Christian Democrats.

But even if the conservative bloc emerges as the strongest force, the Greens, as the second-strongest party, could try to build a progressive government together with the Social Democrats and one of the smaller parties, either the liberal Free Democrats or the Left party, forcing the conservatives into opposition.

All three leading parties have ruled out a coalition with the far-right Alternative for Germany, which wound up the biggest party in opposition after the Social Democrats joined the Christian Democrats in government in 2017.

“If they have the numbers, the Greens would have to be mad to turn down an opportunity to form a progressive government such as this,” Mr. Odendahl said. “A conservative-Green government would be the status quo with a Green tinge.”

Coronavirus UK: Will the self-isolation period increase to 10 days?