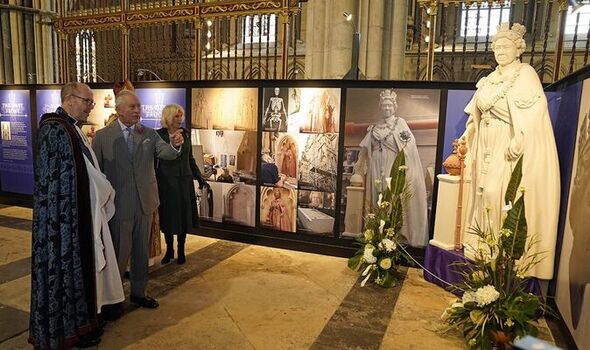 King Charles and Queen Camilla unveiled a touching statue of the late Queen Elizabeth II at York Minster today. The sovereign and his wife looked unfazed, despite being the target just minutes before of a protester who threw eggs at them.

A man believed to be the egg-thrower was arrested by police officers after he managed to hurl four eggs at the senior royals – some of which landed near the King’s feet.

The protester was also heard shouting: “This country was built on the blood of slaves”.

The incited took place outside of the York cathedral, just minutes after Charles and Camilla had crossed Micklegate Bar, a medieval gateway where monarchs are traditionally welcomed to the city.

After the man was taken away by the police, Charles and Camilla, accompanied by officials, carried on with their walkabout, speaking to supportive members of the crowd.

They then headed to the York Minster to attend a brief service held by the Archbishop of York.

After unveiling the statue of his mother, who died at Balmoral Castle on September 8, the sovereign said: “The late Queen was always vigilant for the welfare of her people during her life.

“Now her image will watch over what will become Queen Elizabeth Square for centuries to come.”

The statue had been commissioned to mark the historic Platinum Jubilee, celebrated by the late Queen and her family during an extended bank holiday weekend in June.

Created by local stonemason Richard Bossons, the seven-foot-tall statue weighs 1.1 tonnes and has been made from lepine limestone from France.