Home » Europe » Charles to wield axe on Andrew, Harry and Beatrice who could lose role

Prince Harry, Prince Andrew and Princess Beatrice could see their current key roles within the monarchy axed if King Charles III goes through with his rumoured plan to see a law amended. Despite not being working royals, the two Dukes and the Princess are currently considered three of the five Counsellors of State the new monarch can rely upon to carry out constitutional duties in case of illness or absence from the country. This is because under the 1937 Regency Act, the spouse of the monarch and the four adults aged over 21 next in line to the throne automatically become Counsellors who can stand in for the sovereign on official duties – including attending Privy Council meetings, signing routine documents and receiving the credentials of new ambassadors to the UK. 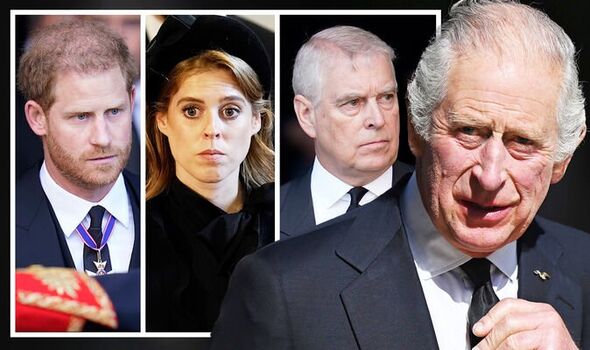 However, the Telegraph reported Charles wants the law amended so that only working members of the Firm can become Counsellors – a move which would strip Andrew, Harry and Beatrice of the title.

The King, the report said, is believed to recognise the incongruity in having three non-working royals holding a role that could possibly see them carry out constitutional duties.

Indeed, several commentators have called on Buckingham Palace in the past months to ask for a change in the law – which can only be enacted by the Houses of Parliament – to see Andrew and Harry relieved of the Counsellor roles.

Charles is reported to be likely to act quickly in taking the relevant steps to have the law changed.

An amended law would likely see Prince Edward and Princess Anne, two prominent working royals, being elevated to the position of Counsellors of the King.

While the Dukes of York and Sussex were already Queen Elizabeth II’s Counsellors, alongside Prince William and the former Prince of Wales, the accession to the throne of Charles created the position also for Queen Camilla and Beatrice.

READ THE LATEST UPDATES ON THE ROYAL FAMILY BELOW

The new King reportedly wants to see the law establishing who can be a Counsellor of State changed as soon as possible.

The Telegraph wrote Charles would like to see the 1937 Regency Act amended so that only working royals can take on this important duty.

At the moment, the spouse of the monarch and the four adults aged over 21 next in line to the throne automatically become Counsellors, who can stand-in for the sovereign on official duties.

If the law was amended, Prince Andrew, Prince Harry and Princess Beatrice would lose the title of Counsellors, likely to be replaced by Princess Anne and Prince Edward.

Counsellors of State can temporarily stand in for the sovereign when absent from the country or ill.

Four ways the Royal Family have shown their support for Ukraine