The Duchess of Cornwall, Camilla, made a racy joke during a visit to a farm in East Sussex. Camila, 71, was lifting up a t-shirt, which had Jamie’s Farm written on it, covering a plaque celebrating the charities success. She joked: “Do you want me to lift up its top?”

The comment sparked rapturous laughter from some members of the audience.

Commenting on the video online, one royal fan wrote: “She’s the best!”

During her visit, the Duchess of Cornwall claimed she felt “very nostalgic”, as she was brought up nearby. 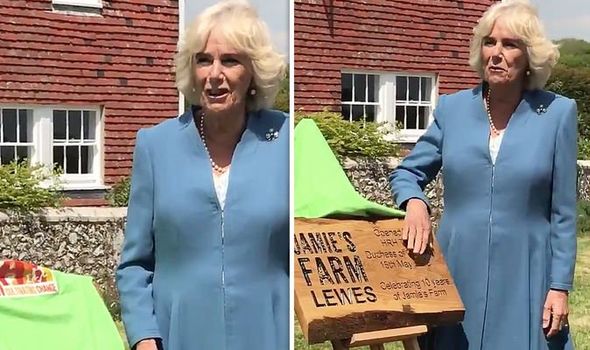 Do you want me to lift up its top?

They Daily Mail’s Royal correspondent, Rebecca English, Tweeted: “It makes me feel so very nostalgic, the Duchess tells me.

“I used to ride here every day and have even been in this kitchen and few times.

“It’s a wonderful place for children.”

Camilla made the joke, while visiting Jamie’s Farm, celebrating the charity’s 10th anniversary, which works with disadvantaged young children.

The Duchess of Cornwall was filmed meeting four-day old lambs and oversaw the making of bath bombs which were using ingredients from the farm.

Greens top poll to turn up heat on Merkel party