New video shows a cheeky crow annoying a fox — by gently pecking at its bum as it tries to bask in the sun.

She spotted the fox relaxing in the warm sun, and decided to get her phone out to snap a few photos.

A cheeky crow then walked into shot and lunged at the unsuspecting fox.

The unusual pair of animals seemed to see the situation as a sort of game, as the bird repeatedly circled the fox.

Mia, an account manager, said: ‘I was dog-sitting a pup at the time and I was just walking the dog around De Beauvoir Square when I saw the fox.

‘I thought he looked really cute and was filming him and while I was filming the crow approached from across the park. 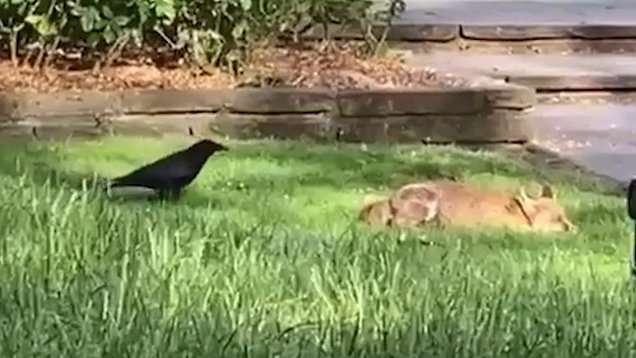 ‘I filmed a number of videos of the crow pecking the fox over and over again.

‘The fox was just being patient, the sun was just shining on the fox and he was sunbathing.’

At one points in the footage, the crow can be seen considering further pecks as it circles the fox.

But the disrupted animal soon reared its head and turned around, scaring the crow away.

It finally flew off before the fox settled again on the warm grass.