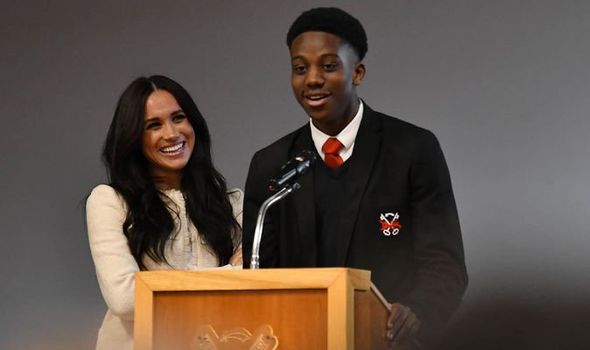 A gleaming Aker Okoye, 16, was invited on stage by the Duchess of Sussex during a visit to Robert Clack School, Dagenham, East London, on International Women’s Day. The surprise school visit on Friday was the last of Meghan’s solo royal engagements, during which she urged pupils to “speak up for what is right”. During the day she asked for a “brave young man” to join her on stage and Aker, who said he couldn’t miss the chance to speak with someone he admired, strode to the stage.

The teen took full advantage of the moment, stealing a peck on the cheek and long embrace from Meghan.

In the neatly penned note, Aker poured over Meghan, saying his excitement had gotten the better of him on the day. He wrote: “I was just overwhelmed and shocked to see her arrive at my school. It was a pleasure to hear her speech and to speak in front of her as well.”

In his apology note, Aker said he hopes to meet Harry one day too. He concluded: “ I nearly met you Harry last year when you came to East London to open the future youth zone but I was away with the school. I hope to meet you one day. Good luck for the future.” 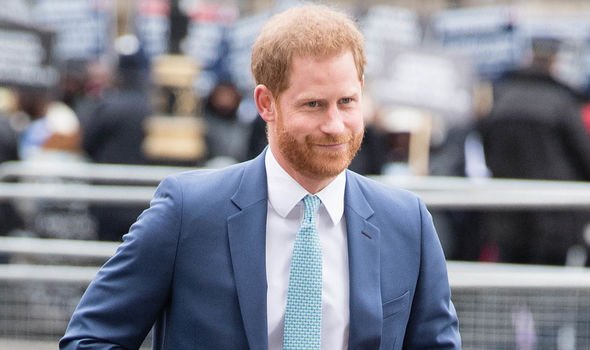 He told The Sun he is writing the letter to make sure Harry doesn’t have a problem with the hug and to apologise for being so forward. The youngster joked it’s lucky he is single unsure of what a girlfriend would have made of his reaction to Meghan.

He added: “Meghan didn’t [mind the hug] – she found it funny and I’m sure Harry will as well.

“I thought she was amazing and so special. Her talk was very inspirational. I was in awe of her. She is beautiful and elegant.

“I was starstruck. When I saw her I thought I was doing the right thing by cuddling her. She found it funny which was great. Everyone at school was so thrilled that she was there.”

The Duke and Duchess of Sussex shared a video of Aker speaking on stage on their Instagram account. 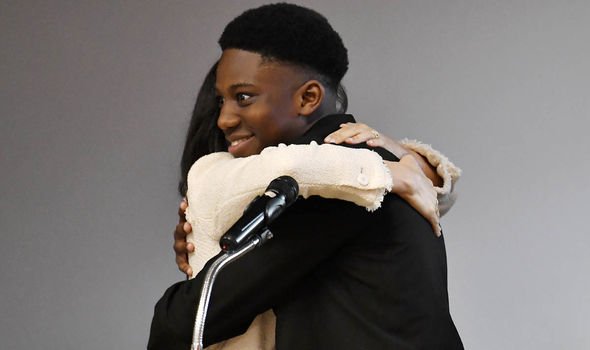 In the video, Aker explain that, to him, International Women’s Day is : “a reminder that it’s not only me that’s a part of my life. It’s not just me that’s part of the team of my own success.

“It reminds me that there are countless of people in my life — lots of strong women — that uplift me as a man,” he continued. “International Women’s Day is a reminder for all men and women that women can do it all and do it all.”

During the day, Meghan encouraged pupils to find their voice telling them: “No matter how small you might feel, no matter what colour you are, no matter what gender you are, you have a voice and you certainly have the right to speak.”

Unvaccinated carer sobs after losing job because she won't get jabbed