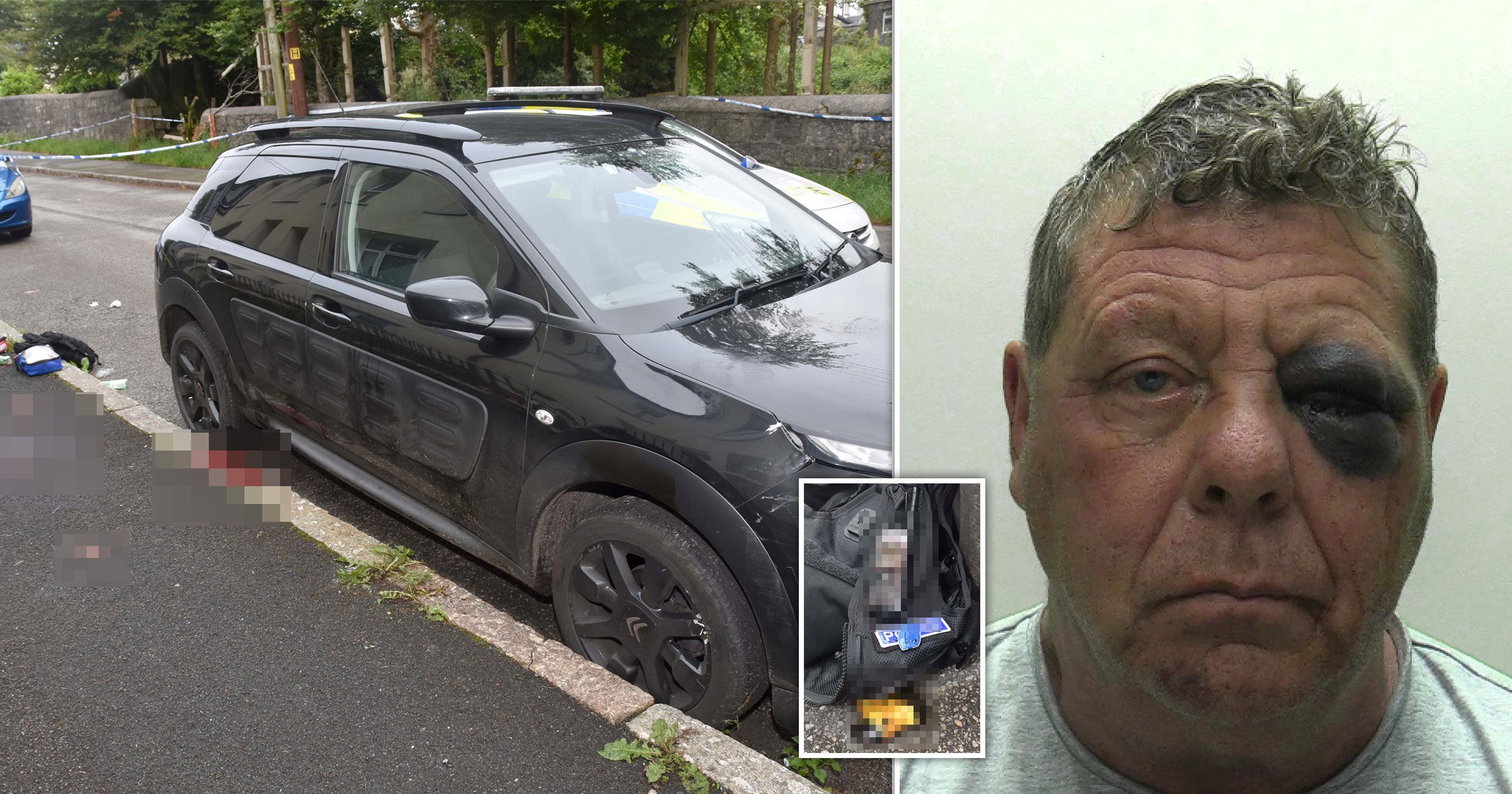 A violent thug jailed for 20 years after he stabbed two police officers has been unmasked as a paedophile wanted for historic sex offences.

Jon Ross, 62, subjected PCs Darren Brimacombe and Timothy Willett to a ‘savage’ attack after they responded to a disturbance at a home in Dartmoor last year.

Upon arriving at the scene, Ross burst from his parked car and stabbed and slashed at both officers with a knife after they found him in Princetown, Devon, in the early hours of July 9.

PC Brimacombe suffered a serious arm injury and cuts to his head and face. PC Willett sustained serious injuries to his arm and fingers.

Both officers needed hospital treatment and have undergone surgery as part of their recoveries.

Neither officer has come back to frontline duties as a result of the incident, and both are looking for other roles within the force.

Ross, who sported a black eye in his police mugshot, admitted to two counts of assault occasioning grievous bodily harm, with intent. He had also pleaded guilty to charges of affray and assault on a previous occasion.

The 62-year-old had previously been found guilty of four sexual offences against a child, in a trial that concluded in April.

Prosecuting the case chronologically, Lee Bremridge first detailed sexual abuse which happened around 20 years ago in the Plymouth area.

The court heard how Ross had previously forced his victim, a young teenager, to touch him sexually before he indecently assaulted her, Plymouth Live reports.

Reading the victim impact statement, Mr Bremridge said: ‘The psychological effect has been immense. The justice system is not enough to punish this man.’

The victim spoke of the devastating effect the first trial had on her mental health and her belief that Ross would never change.

She said: ‘He is a massive danger to society and unless he dies in prison no sentence is ever enough.’

Moving on to the first of two violent incidents which occurred in 2021, the court heard how ‘In the early hours police were called to Mr Ross’s house in Burrator Avenue following reports of shouting. Officers knocked on the door and were told it was open.

‘They were met with an extremely violent Jon Ross. He stood at the top of the stairs and threw weight lifting weights down telling them to get the f*ck out or he’d kill them.

‘They remained at the foot of the stairs when Mr Ross returned with a knife. He held it out and threatened to kill the officers.

‘He lunged at an officer with the knife but the stabbing attempt was unsuccessful as a police officer was holding a riot shield.’

In an interview, Ross later stated that he’d taken an overdose and only attempted to harm himself.

The court then heard how police were called to reports of a disturbance at a property late on 8 July 2021.

PCs Brimacombe and Willett, who knew Ross from previous community work, searched the area and located his vehicle.

They found him in the driver’s seat and drinking from a bottle.

Both officers calmly spoke to Ross despite him being verbally abusive and aggressive towards them.

Without warning, Ross swung at and narrowly missed PC Willett with a knife.

He then exploded out of the open car door and attacked PC Brimacombe who was repeatedly stabbed as they grappled on the ground.

The officer suffered lacerations to his scalp and face – nearly having the end of his nose cut off.

PC Willett then struggled with Ross and pulled him off his injured colleague.

He was stabbed in his forearm and sustained finger injuries as he wrestled the blade from Ross’s grasp.

Both officers then activated emergency buttons on their radios to request immediate help.

PC Brimacombe’s arm was bleeding so heavily, a police-issue tourniquet had to be applied to the wound.

Ross was later found to be twice over the legal limit of alcohol to drive a vehicle.

Devon & Cornwall Police has released shocking images of the scene, with the blessing of PCs Brimacombe and Willett, to highlight the dangers faced by officers.

Judge Simon Carr, presiding, praised the victim of the sexual offences and said: ‘Your victim gathered the courage to approach the police to report what had happened to her.’

And in referring to the serious assault on the officers, he said: ‘Frenzied is a term overused by the court but not in this case.

‘Armed with a knife, you stabbed out repeatedly causing permanent injury to both. The psychological damage has been immense. You went on to attack two other officers.’

Ross was sentenced to 12 years for his assault on the two officers and eight years for the sex offences against a child. He will serve the sentences consecutively.

He will also spend the rest of his life on the Sex Offenders register.

UK PM Johnson to go to Brussels next month for Brexit talks: The Times