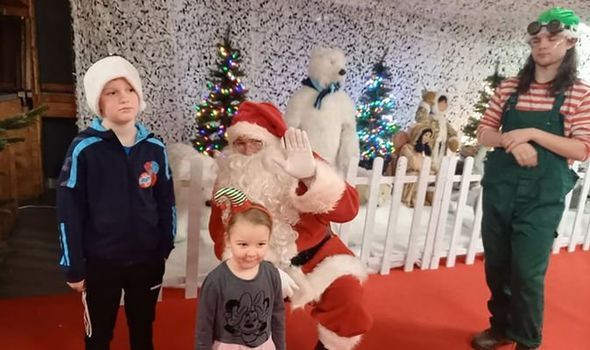 Winter Funland Manchester, billed as a giant funfair with “the best rides in the UK”, left families with young children disappointed this week as they claim some rides were missing parts, and one even stopped working. With adult tickets costing £18.50 and family tickets (two adults and two children or one adult and three children) at £70, angry parents are now demanding their money back.

It is also alleged Santa didn’t have his beard on at times, the circus was “shocking” and food and drink options were limited and “extortionate” at BEC Arena (Bowlers Exhibition Centre) in Trafford, Greater Manchester.

The families say their complaints have been ignored by the organisers and claim comments giving negative feedback on the event have been deleted from the official Winter Funland Facebook page to avoid potential customers seeing them.

But bosses say all rides “are of the highest standard with regular rigorous checks by our health and safety officers” and that “at no time has a ride been left without an operator during a live session”.

They also say its social media team “periodically turn comments off when we feel we are being unfairly trolled by a very very small minority of people that have a grievance” and have suggested that “the correct and best procedure is to email us directly where we will try to sort the matter”.

What a s**t show it was. The whole event from start to finish was a joke, I’m so annoyed

“Where do I even start,” the mum of two said.

“What a s**t show it was. The whole event from start to finish was a joke, I’m so annoyed.

“The ferris wheel stopped with my children on and the man running it didn’t seem to know how to work it. Some of the rides were visually missing parts. Cars had wheels missing.

“My children got on a small roller coaster, the man didn’t set it off after strapping them in, he walked off to go and get a drink leaving them strapped in the ride for close to 10 minutes.

“On another ride, the jumping jack, my children was on it and the man set the ride off and left. One of the other children on the ride was very upset crying to get off but the man operating it was nowhere to be found.”

Anna said she’d booked tickets for the event having previously attended Winter Funland at EventCity in 2019 but “this time was such a let down”.

She continued: “The circus was shocking, I’ve seen better street acts. They had no microphone so we couldn’t hear a thing they was saying.

“There was one side carnival game thing that shoots water, it was leaking all over the floor. My children have been asking me millions of questions as they saw Santa putting his beard back on. Honestly the list is endless, the whole thing was a disgrace. I’ve been left annoyed and very disappointed.”

Winter Funland, which also runs an event in Birmingham, promises “a winter wonderland” with “a fabulous indoor funfair”.

But Fran Neylon, who forked out £91.50 on tickets for herself, her partner, and three children, aged six, 12 and 14, says they left after 25 minutes as there was very little for the older ones to do.

The mum added: “The kids had more fun sat in the car than the actual ‘gigantic indoor funfair’.”

“When we were walking in a family was coming out and stopped their car and said we’ll be very disappointed, as they’d lasted 10 minutes and walked out.

“Apart from the dodgems, the only rides there were only suitable for children under six. We were expecting what it was like at the EventCity as it didn’t explain there would be less rides and smaller age range rides.

“We were just shocked how small the event was compared to what we have been used to. Honestly felt like it was such a disorganised event with no thought at all going into it.”

Hayley Gilman took her eight-year-old daughter, 10-year-old son and his friend of the same age and says they left after she complained and was shouted at by a security supervisor.

“We asked to speak to the manager and was met by a security supervisor who began to shout at us with no mask on,” she said.

“None of the staff inside were wearing masks. We questioned why we had to pay extra for rides when it says on their website everything is included.

“The trampoline for £5 was the only attraction really that any child over the age of five wanted to go on.”

Becky Howcroft took her boys, aged six and three and said ‘the whole event was crap compared to previous years’.

“Winter Funland have blocked me from commenting on their posts now, but it honestly was a disgrace compared to previous years when it was held at EventCity,” she said.

“The first ride the kids went on was the ferris wheel, which had an unsafe and damaged cabin. There were very few rides and it advertised all rides free except for prize stalls, however this was not the case as you had to pay £5 for trampolines.

“It advertised an inflatable park when in fact they had only two inflatables, one which looked like it had a puncture. They only offered one place to buy food which was a burger van and it cost me £49 for four hot dogs and chips and four bottles of water.

“I am furious and disappointed for my two boys and also upset that I recommended this place to friends who have booked and are yet to experience what can only be described as a s**t show.”

Event director Glen Ramsden said: “Winter Funland is taking place at the BEC Arena rather than EventCity where it has been held previously.

“Due to the location change and a smaller venue, we have had to reduce the scale of Winter Funland. This is clearly explained on our website and we have made it clear that there is no Santa’s Grotto or ice-skating rink this year, the price was reduced by £20 a family to reflect this.

“We have put a huge effort into making the event feel really Christmassy with more decorations, more walkabouts and our resident elves causing mischief and we know this has bought a lot of joy to families.

“Thousands of families are having an amazing festive time so we are sorry to hear some have not enjoyed the event as much as previous years.

“Customer safety is always our number one priority and Covid-19 checks taking place at the entrance will mean a small wait time.”

He added: “‘All rides at Winter Funland are of the highest standard and regular, rigorous checks are undertaken by our health and safety officers. At no time has a ride been left without an operator during a live session.”

He urged anyone with a grievance to email them directly at [email protected] ‘where we will try to sort the matter’, adding: “We have seen thousands of happy faces walking around Winter Funland which is a testament to the hard work of our staff against a difficult backdrop of COVID-19. We hope many more will continue to visit.”

Top lawyer says trials should be held without juries during pandemic