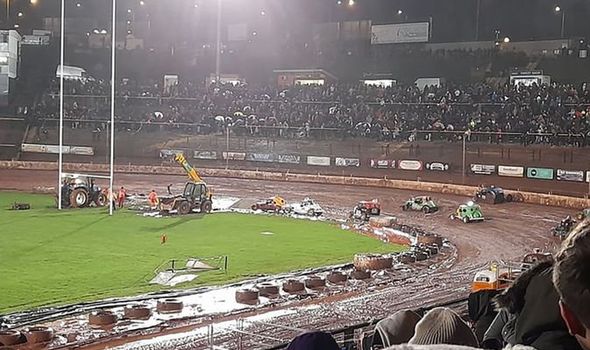 The fireworks evening was combined with a stock car racing event at a rugby stadium on Saturday night but the vehicles got stuck in the mud. Outraged guests vented their fury at the  “horrific, badly organised” event, which didn’t feature a monster truck performance as advertised.

One mum, called Hannah, spent £36 to take her two young children and her mother to the evening at Odsal Stadium in Bradford, West Yorkshire.

Hannah, 30, told Yorkshire Live: “There must have been around 5,000 people there along with a lot of disappointed children.

“The children were bored as there was nothing to entertain them at all rather than put another two races on the fireworks should have just been done early and the event ended early.

“Forty-five minutes before the end three-quarters of the people attending had left that’s how bad it was.

“We spoke to a few stewards who all agreed what a shambles it was and that the event should have been ended earlier.

“I had been bigging it up to my sons aged eight and two, telling them how great it was going to be but all they kept asking me was when could they go home.”

Hannah, a guest at the event

It is believed the monster trucks section was cancelled due to health and safety.

But Hannah, from Brighouse, West Yorkshire, called the whole thing “a disaster”.

“It was meant to be stock car racing, banger racing, monster trucks and £10,000 of fireworks,” the mum of two added.

“The whole thing from start to finish was a disaster and should have been brought to a close a lot sooner than it was.

“It started at 4.30pm and ended at 8.30pm and most of this time we were just sat around cold and bored waiting for the tractors to pull the cars off the track as it was a mud bath.

“There were four races that lasted a small amount of time due to all the cars getting stuck in the mud then an hour waiting for the tractors to get them all off the track in-between each.

“We waited until the end as after sitting in the cold for hours of no entertainment we thought we might as well see the fireworks but wished we had just gone to a standard bonfire which the fireworks would have been just as good they definitely weren’t £10,000 worth.

“We were utterly disappointed with it all and felt it was a complete waste of money especially for the price we paid and I’m pretty sure everyone else who attended would agree which clearly showed how many people left early.

“The poor stewards said how much abuse they had got off people it was that bad which was also unfair as they couldn’t change it.

And another man wrote on Startrax Stockcar Racing’s Facebook page: “Last night was horrific, badly organised, half of the event didn’t even happen, no monster truck as advertised, the ‘£10,000 firework spectacular’ was far from it, staff were rude and swearing in front of kids, yet to see a race take place.

“The commentator did his best to build excitement at what can only be considered a disaster but the odds were against him. Waste of time and money.”

And a woman wrote: “My family go often to watch the racing here and it’s been amazing! Tonight was appalling. Total embarrassment to the sport.

“Poor kids are gutted. No monster trucks and not much racing. I feel sorry for the drivers too. The staff/stewards attitude was beyond ignorant and rude. Nowhere to stand, the younger kids couldn’t see. A refund is definitely needed.”

In a social media apology, Startrax Stockcar racing manager Steve wrote on the event’s Facebook page: “We apologise unreservedly with regards to last night’s event and of course the resultant weather.

“Let us assure you, we have been involved in motorsports and Odsal for 27 years and indeed promoted at Odsal until its closure in 1997.

“We also invested heavily in its return for 2021. It has put on this far 11 successful events in 2021 including the World Stock Car Final only last month.

“We do care passionately about what we do and, trust us, we are devastated and apologise for the weather; we had invested heavily to put on a great show.

“It was deemed health & safety-wise unsafe for the Monster Trucks to participate, which we announced but as advertised only a part of the show.

“I make no excuses, it was with the weather not a pleasant night for your family or ourselves and we apologise to your family and friends.”

In a second post on its Facebook page he wrote the evening “will haunt me as a bad memory into retirement,” and he firmly denied that his company was out to make a “fast buck” saying its reputation was extremely important to them.

Anyone wanting a refund should contact the company directly.