Horrifying CCTV footage showing an incel mass murderer stalking the streets of Plymouth has been released for the first time.

Jake Davidson, 22, killed his own mum in their home, before indiscriminately shooting dead four others in the space of eight minutes.

His victims included three-year-old Sophie Martyn who was walking a teddy in her pram while holding her dad’s hand before she died.

An inquest jury was today shown CCTV, body cam footage and audio of the chilling rampage on August 12, 2021.

Shortly after 6pm, Davidson killed his mother Maxine, 51, who had reached out to her sister Marlene Hill during a fight with her son.

After calling 999, Marlene could be heard saying: ‘Her son has got mental health problems. He has grabbed her by the throat and is not messing around.’

After leaving the house at 6.08pm, the killer shot Sophie and her dad Lee Martyn, 43, while they walked the family dog Mabel on Biddick Drive.

Married carpenter Lee was fired at three times and Sophie once – firstly at a range of 20m and then at 1m. 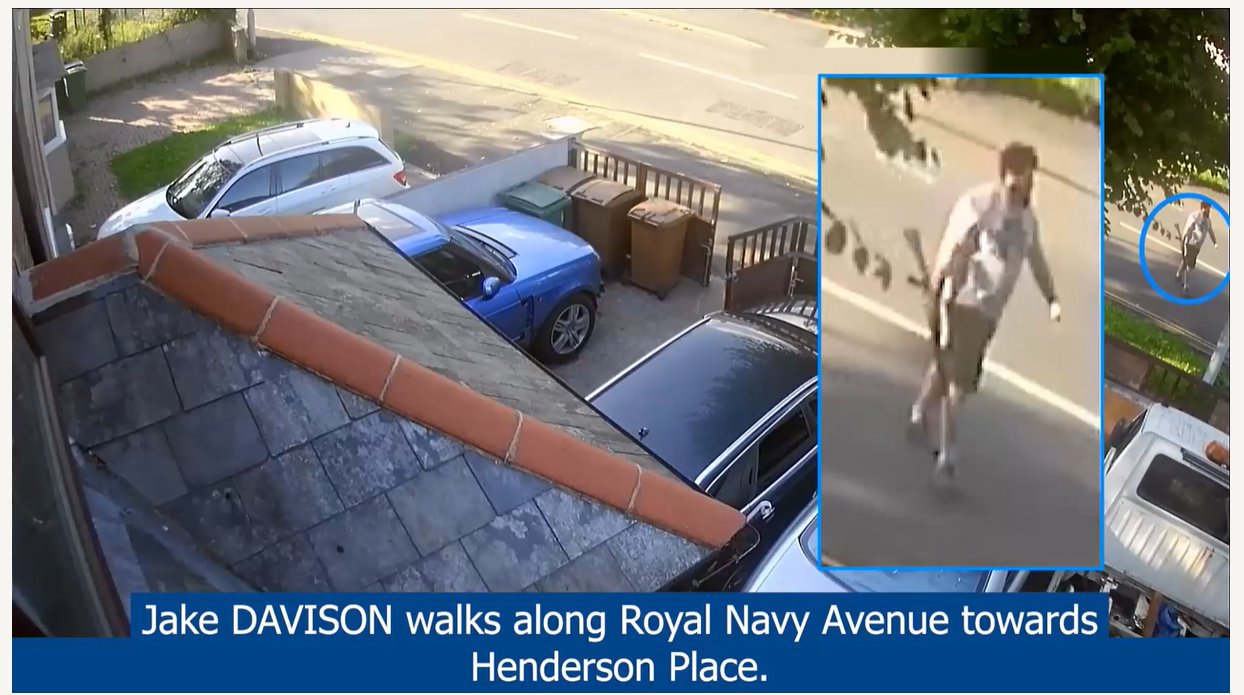 Panicked neighbours began to ring 999 at this point after hearing gunshots.

One told the operator: ‘I heard a bang. The person who done it lives at number 17 Biddick Drive.

‘I think his name is Jake something. I heard a bang and thought “what the hell is that”.’

Another caller said: ‘He has gone up the back of Biddick Drive – shooting other people I think. With an automatic weapon, he was just firing all the time.

‘It looks like a black automatic rifle. He might have killed his mother – his front door is open.’

Davison then fired at a house in Biddick Drive injuring two other people – a 33-year-old man, and a 53-year-old woman.

Another 999 caller warned: ‘He is shooting everywhere.’

Stephen Washington, 59, a grandad and a full-time carer for his wife, was killed as he walked his two dogs in Lineaer Park.

A terrified bystander fled the scene, before Davison headed along Royal Navy Avenue, towards Henderson Place, carrying the shotgun.

Artist and new grandma Kate Shepherd, 66, had recently left Lidl when she was shot in the stomach at close range outside Blush salon.

Unarmed police officers arrived on the scene at 6.15pm and started giving her first aid. She was rushed to Derriford Hospital but couldn’t be saved.

Davison then turned his pump-action shotgun on himself on the corner of Bedford Street and Henderson Place at 6.24pm.

The inquest for the victims began at Exeter Racecourse yesterday (Tues) and will address concerns from the families about why Davison was ever allowed to legally own a firearm under a sporting licence.

The gun was even confiscated by cops following an accusation of assault made against him – but given back to the apprentice crane operator shortly before the tragedy.

The devastated family of the mass shooter has said they ‘wished they could turn back time’ and stop Davidson.

Josh Davison, the son of Maxine and brother of the killer, said: ‘Our involvement in this inquest is to help prevent this happening in future – an event like this cannot and should not happen again.’