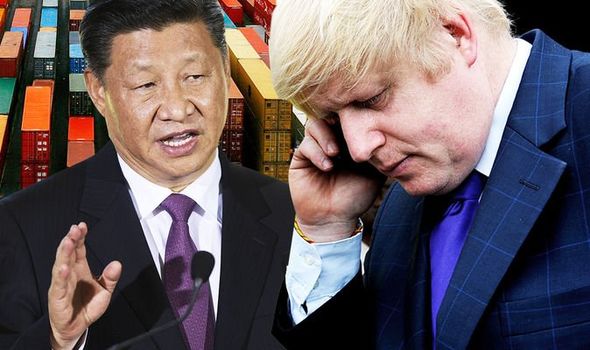 Liu Xiaoming, the Chinese ambassador to London, admitted it may take some time before the two sides can have detailed discussions as the country focuses on bringing the deadly spread of coronavirus under control. But after a feasibility study was quietly paused last year during the Brexit deadlock, he said there is a will “to engage each other more positively”. The top diplomat told Sky News during an interview at the Chinese embassy in London: “When it comes to a trade deal, we are open.

Mr Liu said China and the UK had initially set up a working team to study the feasibility of a trade deal last year, but the British government has been focused on breaking the Brexit impasse with the European Union.

When asked whether the working team had restarted after its efforts were paused, he said: “We are ready to work with our British colleagues any time.”

The diplomat added British officials had also “expressed a willingness” to restart talks.

It also comes at a time when the divide between the UK and EU over respective rights in a future post-Brexit trade agreement continues to widen.

Brussels has toughened its position on any deal with the UK, with the latest version of the bloc’s negotiation mandate responds to serious concerns from EU nations hat the European Commission’s original draft did not do enough in requiring Britain remains closely aligned to EU regulations.

The new text highlights any post-Brexit trade deal must ensure a regulatory playing field is created that “will stand the test of time” and provide “sufficient guarantees, so as to uphold corresponding high levels of protection over time”.

The updated draft mandate also makes clear that any agreement should “uphold” EU fishermen’s current rights in UK, which has so far proved to be one of the most contested elements between the two sides.

Speaking on Monday, the UK’s chief Brexit negotiator David Frost warned Britain would press ahead with securing a Canada-style trade deal before the end of the transition period in December, adding the bloc’s demands for a level playing field undermine the fundamental purpose of Brexit.

But the EU’s chief Brexit negotiator Michel Barnier has slapped down those demands, insisting Britain is seeking market access rights that go far beyond those enjoyed by other countries with which it has trade deals, such as Canada and Japan.

Meghan Markle news: Is THIS why Meghan won’t meet Trump when he visits the UK?

Queen Elizabeth II news: How you can have Queen’s meals delivered to your door