A chip shop owner has had to be rescued after she provoked an angry mob by celebrating the death of the Queen.

Jaki Pickett, who runs Jaki’s Fish and Chip Shop in Muir of Ord, the Scottish Highlands, had to flee after angry people threw eggs and squirted ketchup at the windows.

The abuse started after Jaki posted a video of herself on the shop’s Facebook page popping a bottle of champagne.

Pictures show her holding up a chalkboard that read ‘Lizard Liz Dead and London Bridge has fallen.’

In the clip, posted just a few hours after the news of the Queen’s death was announced, Jaki is also seen holding up a sign and shouting the anti-monarchy slogans.

She is heard being encouraged by someone off-camera to ‘do it again’.

She also posted a similar message on social media, which included letters associated with the Q-Anon conspiracy theory.

The original video was deleted from Facebook – but it later resurfaced on TikTok and began to inspire rage. 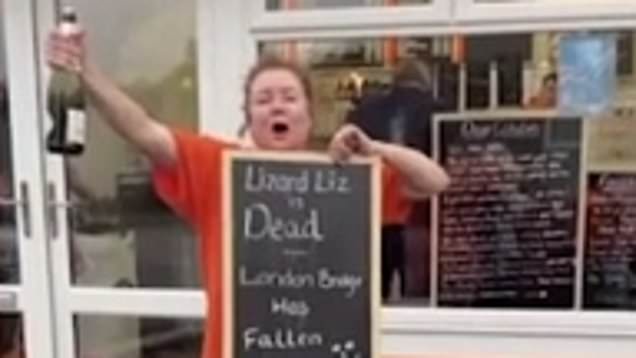 She was immediately targeted on social media, with angry locals review-bombing her ratings and flooding into the comments to express their disgust.

The anger escalated so far a later video shows Jaki driving away from the scene while being booed by a large crowd.

At least three police vehicles appeared to be present at the scene.

Her actions have also seen her banned from the National Federation of Fish Friers (NFFF), who condemned her for her comments and video.

A statement read: ‘The NFFF has been made aware of social media posts made by one of our members that are in extremely bad taste and completely against all of the values our organisation and industry hold dear.

‘We have discussed this as a board and have taken the decision to revoke the membership of this business owner and we will be writing to them and asking them to remove all association of the NFFF from her business, social media and websites.’

A Police Scotland spokesperson said: ‘Shortly after 8.30pm on Thursday, September 8 officers attended at a business in the Seaforth Road area of Muir of Ord following a report of a large crowd gathered in the area.

‘Officers remained at the scene to ensure the safety of all present and the group subsequently dispersed peacefully.

‘No further police action has been required.’