Professor Chris Whitty warned ‘more records will be broken’ after the UK recorded its highest amount of Covid cases since the pandemic began.

England’s Chief Medical Officer said infections will continue to rise to unseen levels due to the transmisibility of the Omicron variant ripping through the country.

Prof Whitty said there are now ‘two epidemics on top of one and other’ – an existing Delta one that is ‘roughly flat’ and a ‘growing Omicron one’.

He told a Downing Street press conference: ‘I am afraid we have to be realistic that records will be broken a lot as rates continue to increase in the next few weeks.’

The UK has recorded 78,610 confirmed new Covid cases today, the highest number since the pandemic started.

Boris Johnson – who mixed up the crucial figure as he opened the briefing – said the doubling rate of Omicron in some regions is down to less than two days.

‘I’m afraid that we’re also seeing the inevitable increase in hospitalisations – up by 10% nationally week on week – and up by almost a third in London,’ he said. 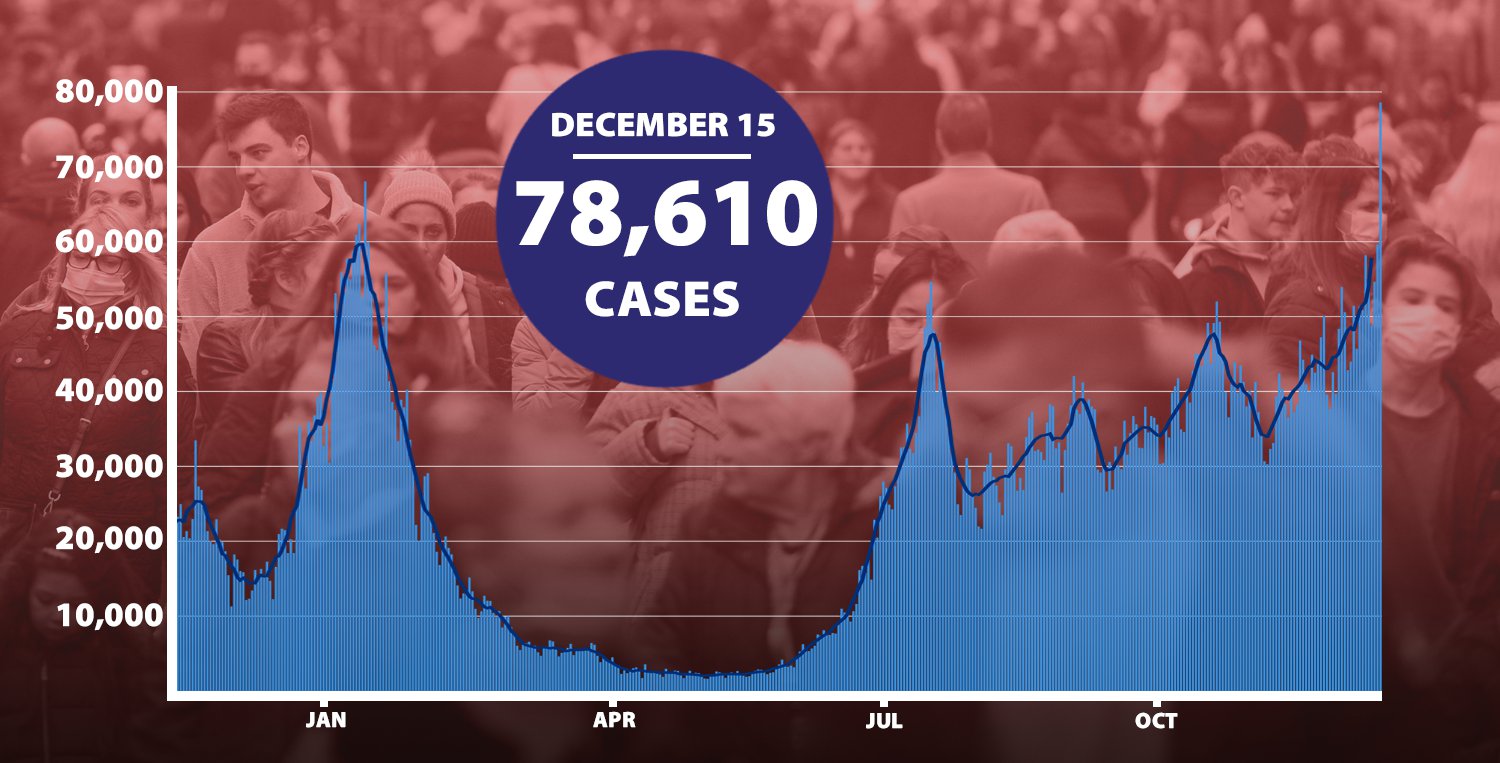 He said there was some hope, as more than 45% of all adults in England had now received a booster vaccine dose, including more than 88% of those aged 70 or over.

The NHS is racing to offer all over-18s a third dose by the end of the year after early data showed two jabs was not enough to protect against Omicron.

But Prof Whitty said the rate of infection is so high the new variant could significantly overwhelm the NHS – with the true impact to become apparent over the next few weeks.

‘There will be substantial numbers (in hospital), that will become apparent after Christmas… that is a reasonably nailed on prospect’, he said.

Scientists still don’t know exactly how severe Omicron will be, but doctors in South Africa, where the mutant strain emerged, say it is far more mild than Delta, the previous dominant strain.

But Whitty said he wants to advise people to be very cautious about figures coming out of the country suggesting Omicron is leading to fewer people ending up in hospital.

He said: ‘The first caution on this is simply a numerical one – if the rate of hospitalisation were to halve but you’re doubling every two days, in two days you’re back to where you were before you actually had the hospitalisation.

‘If the peak of this is twice as great, then halving of the size of the hospitalisation rate, you still end up in the same place. And this peak is going very fast.’

He added: ‘The second point I wanted to make, which I’m not sure it’s fully been absorbed by everybody, is that the amount of immunity in South Africa for this wave – because of a prior Delta wave and vaccination – is far higher than it was for their last wave. And therefore the fact that there is a lower hospitalisation rate is unsurprising.’

Prof Whitty said it is still possible that Omicron could be a slightly milder disease.

But he said there was a danger this is being ‘over-interpreted’ to say Omicron ‘is not a problem and what are we worrying about?’.

‘I want to be clear, I’m afraid this is going to be a problem. Exact proportions of it, of course, South African scientists and UK scientists and scientists globally are trying to determine at the moment,’ he said.

Despite the bleak prediction, Boris Johnson said he would not be introducing introduced more Covid restrictions.

The prime minister said he ‘thinks’ continuing with Plan B and the booster rollout is the ‘right approach’.

But Prof Whitty said he would advise people to cut their social contact, and only go to events that really matter to them.

Man stabbed to death outside row of shops at lunchtime