Home » Europe » Christmas 2021 RUINED? Without truckers, it could be 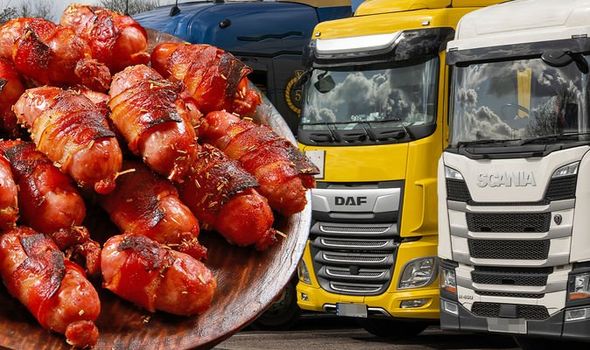 The chief executive of the British Retail Consortium spoke as the British Meat Processors Association (BMPA) said it would struggle to get festive favourites like pigs in blankets into the shops this Christmas.

The warnings come as McDonald’s announced it had run out of milkshakes and some bottled drinks. Last week, Nando’s closed 45 of its 450 outlets after its chicken supply was disrupted by the trucker shortage and other staffing problems.

Industry analysts blame the crisis on a fall in the number of foreign drivers after Brexit and Covid-related absences.

Ms Dickenson said: “So far, disruption has been minimal thanks to the incredible work by retailers and their suppliers.

But she added: “Government will need to play its part.”

She called on ministers to ramp up the number of HGV driving tests being taken, offer temporary visas for EU drivers and change the funding of driver training.

Nick Allen, chief executive of the BMPA, blamed the Government’s immigration policies for the challenges. He said members’ workforces were on average about 13 percent down.

He said: “Some of the pig processors are having to cut down on how many they are processing a week so that’s starting to have an impact.

“We are cutting back and prioritising lines and cutting out on things, so there just won’t be the totals of Christmas favourites like we are used to.”

He said the supply of pigs in blankets — sausages wrapped in bacon — could be down by a third.

A Government spokesman said: “We recently announced a package of measures to help tackle the HGV driver shortage. They include plans to streamline the process for new drivers to gain their licence.”