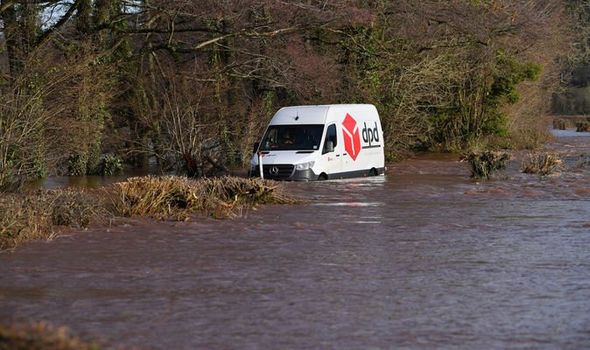 Some areas of the South West of England and Wales saw more than three inches of rain on Friday night and early yesterday.

Emergency services came to the aid of the DPD driver when he became stranded in flood water in Newbridge on Usk, in Wales.

In Cornwall, 18 people had to be rescued as a campsite in Notter Bridge was swamped after its flood defences were breached, and two people were plucked to safety by the RNLI when they became trapped on storm-lashed Tregantle Beach.

And in Looe, more than 100 homes were blacked out as storms brought trees crashing down on to power lines.

The River Avon burst its banks in Tewkesbury, Gloucestershire, as did the River Towy in Carmarthenshire, causing widespread flooding.

MI5 boss: We face a ‘nasty mix’ of terrorism and state-backed hostilities