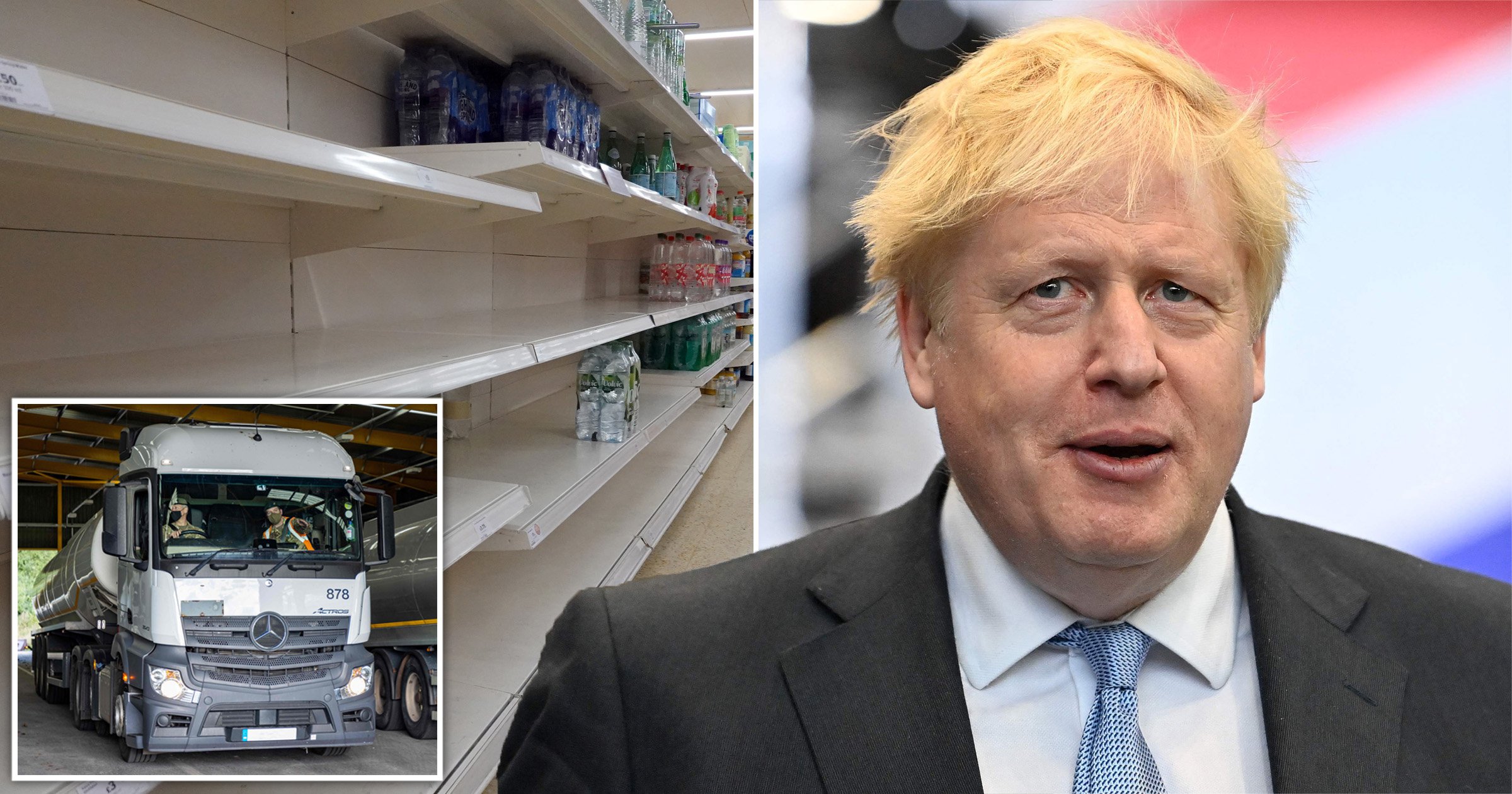 Despite fears over fuel and food shortages, soaring energy bills, tax rises and a potential livestock cull – the prime minister insists this Christmas will be ‘considerably better’ than last year.

But Boris Johnson and chancellor Rishi Sunak would still not rule out issues with the supply chain leading up to the festive season.

But ministers hope soldiers tackling the fuel crisis this week will start to ease the pressure on petrol stations across the UK.

The PM insisted the fuel crisis was ‘abating’ and, referring to the U-turn on lockdown rules days before last Christmas that kept families apart, he said: ‘Christmas, let me tell you this — I’m very confident this Christmas will be considerably better.’

At a youth club in east Manchester — where he donned boxing gloves as the Conservative conference opened in the city — he insisted: ‘This country leads the world, actually, in logistics and supply chains.

‘We’ve got very good supply chains. Where there are issues that we can help with, we will do everything we can.’

The chancellor previously said the Government will do all it can to ‘mitigate’ global shortages ahead of Christmas.

‘We’re seeing supply disruption, not just here but in lots of different places, and there are things we can try and mitigate, and we are,’ Mr Sunak told BBC Radio 4’s Today programme.

‘But we can’t wave a magic wand. There’s nothing I can do about the decision by a country in Asia to shut down a port because of a coronavirus outbreak.’

Mr Johnson appeared to back this warning, admitting issues could still linger on until Christmas.

On the BBC’s The Andrew Marr Show he said: ‘Rishi is invariably right in everything he says.’

But he swiftly added: ‘It depends how you interpret what he is saying.’

Yesterday the Petrol Retailers Association said the ‘crisis is virtually at an end in Scotland, the North and Midlands’ but fuel is ‘still not going to pumps in London and the south-east’.

The Road Haulage Association revealed it warned the PM in June of a major crisis ahead because of Brexit, a backlog of licence applications due to Covid, and tax changes that raised costs for companies and drivers.

But the PM insisted: ‘We have known about shortages long before then. They’ve been a chronic feature of the way the road haulage industry worked.’

He said he would not ‘just pull the big lever marked uncontrolled immigration and allow in huge numbers of people’ but did not rule out more temporary visas for foreign drivers.

Mr Johnson also did not rule out tax increases on top of National Insurance rises next year and this week’s ending of the £20-a-week Universal Credit uplift.

He said: ‘You have no fiercer and more zealous opponent of unnecessary tax rises than me, but we have had to deal with a pandemic on a scale this country has not seen in our lifetimes and long before.’

Office for National Statistics figures show pay rose by 6.8% in the year to July, or 4.5% after inflation — but it said figures were ‘distorted’ by the 0.4% slump in wages last year at the start of the pandemic.

Mr Johnson tried to deflect warnings that 120,000 pigs face incineration due to a shortage of abattoir and butchery staff in the next 10 days.

Farmers say they will have to be culled as it will become too costly to keep feeding them.

But referring to mass Roman animal sacrifices, the PM said: ‘The great hecatomb of pigs you describe has not yet taken place.’

The chairperson of Morrisons Andy Higginson added: ‘There are logistical issues at the moment and those are well publicised and slightly overblown.

‘Supply chains in the UK are incredibly efficient and I am sure we will be able to deliver a great Christmas for customers as we go through.’