Greta Thunberg joined climate change activists at a protest in London to chant “we are unstoppable, another world is possible”.

The 18-year-old Swede joined activists outside Standard Chartered bank, as thousands of people attended Day of Action protests across 26 countries against the financing of fossil fuel projects.

Activists in London have been rallying to stop banks supporting fossil fuels, as well as the building and maintenance of the Silvertown Tunnel under the Thames in east London. 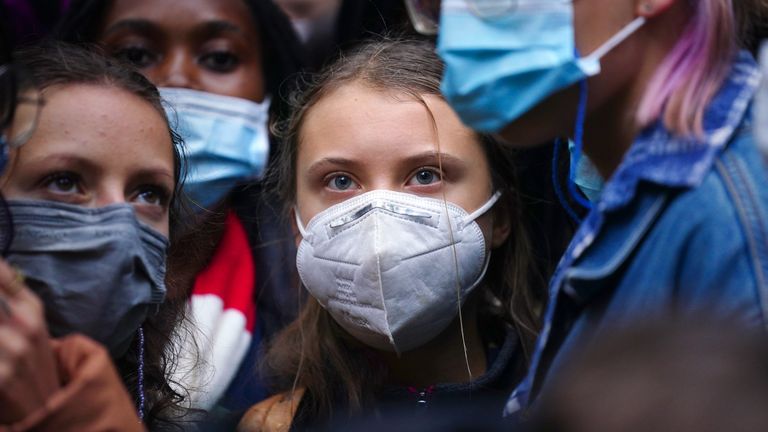 As they made their way from Lloyd’s of London to Macquarie Capital, protesters also chanted: “Ensure our future, not pollution”.

They also sang: “What do we want? Climate justice. When do we want it? Now.”

It comes just days ahead of the COP 26 summit, held in Glasgow, where world leaders will discuss how to tackle climate change.

The Day of Action protest is on track to becoming one of the largest climate finance protests in history – involving countries from across the globe. Activists in London are campaigning outside branches of Barclays, Standard Chartered, Lloyds of London and the Bank of England – as Ms Thunberg joined them to take aim at Boris Johnson and other world leaders.

Ms Thunberg is expected to make an address at the protest this afternoon.

One activist, teacher Kevin Wright, spoke about the Silvertown Tunnel, saying: “We cannot afford it environmentally or financially. There are no grounds that makes it good.

:: Subscribe to ClimateCast on Spotify, Apple Podcasts, or Spreaker.

“It will draw large traffic into the most densely populated parts of the UK.

“All I see is self-interest in this tunnel, all I see is harm, but to some it’s big money and to (London mayor Sadiq) Khan it probably is his pension.” 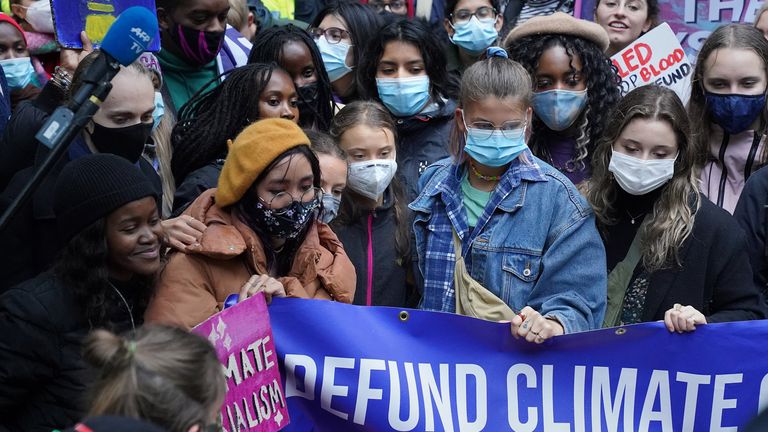 City of London Police officers escorted the activists through the capital’s streets on Friday afternoon while a band played Power To The People.

Elsewhere, five women dressed as banshees and holding cymbals were demonstrating outside Macquarie Capital, wailing and lying on the ground while holding white roses. Ms Thunberg accused the British government of being “climate villains” earlier this week.

She said that the UK, like many other countries, engages in what she called “creative carbon accounting”, where emissions from exported fossil fuels or international shipping and aviation are not currently counted.

“I find it very strange that they’re like, they are the ones who we’re supposed to look up to now, but they are objectively one of the biggest climate villains, which I find very strange,” Ms Thunberg told Sky News.

After a long battle, firefighters contain some wildfires in Greece.