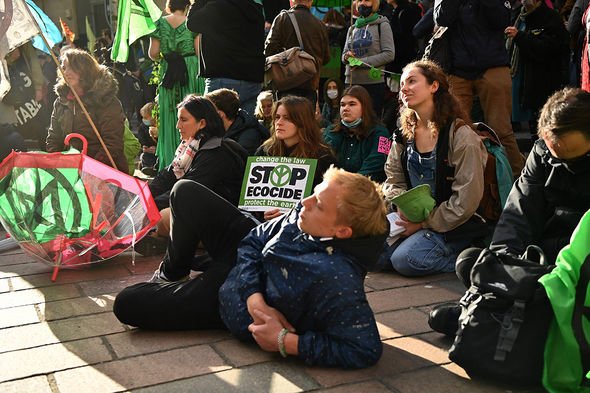 Police officers on foot and horseback are desperately trying to control the crowds in the Scottish city. It is understood the protesters had intended to head towards the climate conference bbut were stopped this afternoon.

Traffic is at a standstill through the city, reports Glasgow Live.

Photos taken at the demo show the campaigners gathered; some are sported fancy dress, with others are waving banners and large flags.

Up to 100,000 people are expected to take part in rallies again this weekend across the city from Friday with significant road closures in place.

But this is despite the world leaders making plans to tackle climate change.

It’s believed, though, the protesters are supporting Greta Thunberg’s opinion that the politicians are “pretending to take our future seriously”.

The teenage environmental activist, from Stockholm, Sweden, said: “Inside COP there are just politicians and people in power pretending to take our future seriously, pretending to take the present seriously of the people who are already being affected today by the climate crisis.

“Change is not going to come from inside that that is not leadership. This is leadership. We say no more blah, blah, blah, no more exploitation of people and nature and the planet. No more whatever the f*** they are doing inside there.”

But during today’s COP26 session, Rishi Sunak launched a drive to force pension funds, banks and other financial institutions to go green.

The Chancellor proposed rules to turn the City of London into the first “net zero-aligned” financial centre.

He also said UK financial chiefs have “responsibility to lead the way”.

Mr Sunak set out his proposals in a speech at a dedicated Finance Day at the United Nations summit. It was the largest gathering of finance ministers in history.