The Commons erupted into cheers as Theresa May commemorated former Prime Minister Margaret Thatcher on Wednesday. Mrs May also paid tribute to Brian Walden, a former Labour MP and Tv broadcaster who died on Sunday aged 86. Today marks 40 years since Margaret Thatcher was elected into the House of Commons. Speaking during Prime Minister’s Questions, Mrs May said: “I would like to congratulate the honourable members from Huddersfield and Birkenhead for having been elected into this House for 40 years and having spent 40 years in this House.

“I also note that 40 years ago of course it was the election of Margaret Thatcher.

“It was always said that Margaret Thatcher had indeed enjoyed being interviewed by Brian Walden.

“And so he did indeed not only have a career in this House, but went on to have a very respected career in television journalism as a broadcaster and interviewer.”

Mrs May entered yet another fiery clash with Jeremy Corbyn during PMQ’s, as she comes under huge pressure over her Brexit deal. 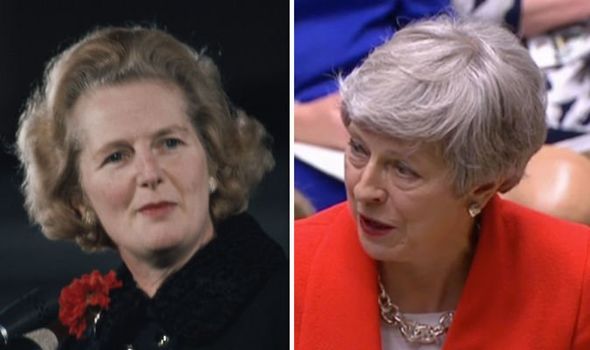 40 years ago it was the election of Margaret Thatcher

Mr Corbyn also lashed out at the Prime Minister over inequality, arguing: “The UK risks having extreme inequality levels of wealth, pay and health.

“Of the G7 countries, only the US is more unequal than Britain.

“Is that something the Prime Minister is proud of?”

Mrs May hit back: “The lowest paid have seen their wages grow the fastest since 2015.

“The top one percent are contributing more income tax than at any point during the last Labour Government.

“That is Conservative delivering for everyone!”

The Prime Minister has vowed to punish disloyal ministers as she prepares to launch a new vote on her withdrawal agreement bill next month.

Mrs May has gone on the attack against her Cabinet, and is said to be furious as the collapse of collective responsibility, opening a crunch meeting by threatening to return them to the backbenches if any further breaches arise.

Cabinet ministers are committed to pressing ahead with cross-party talks with Labour leader Jeremy Corbyn in a desperate attempt to break the impasse, but warned it is imperative a Brexit deal is voted through Parliament before the summer recess.