COPENHAGEN — For nearly three decades, Frank Jensen was at the heart of progressive Danish politics. Twice a government minister, in January he celebrated 10 years as mayor of Copenhagen, a role he combined with the deputy chairmanship of the center-left Social Democrats, currently Denmark’s governing party.

He was also a serial sexual harasser, as he admitted over the weekend after several young women described their experiences with him on newspaper front pages and live television.

On Monday, Mr. Jensen, 59, resigned from his city and party positions. “I’m terribly sorry for the women I’ve offended through my 30 years in politics,” he told Jyllands-Posten, a Danish daily.

The newspaper also cited a post by Mr. Jensen on Facebook in which he wrote: “There are episodes and details that have been experienced differently. But what remains is that some women have experienced that I have crossed their boundaries.”

The length of the list of complaints — women have mentioned unwanted kissing, groping, leg fondling and even licking — and the suddenness of his fall have shaken Denmark, a relatively small, liberal nation that routinely tops international measures of women’s rights and gender equality. But the mayor’s disgrace is part of a gathering confrontation over sexual misconduct in the country.

The case has exposed a wide generational gap between older Danes who often see unwanted touching and kissing or sexual comments as merely awkward and a younger generation who see them as violations and abusive. It’s a divide that places Prime Minister Mette Frederiksen — at 42 the youngest holder of her office but a Social Democrat insider of long standing — in a difficult position.

In a letter to fellow Social Democrats that she posted on Facebook on Tuesday, Ms. Frederiksen promised new independent procedures to tackle misconduct and expressed regret for not speaking out about what she had known about “nooks and crannies” of the party.

“I didn’t handle this leadership task well enough,” she added.

Cecilie Svaerke Priess, 21, chairwoman of one of the party’s youth branches, was one of those who spoke out about Mr. Jensen. “If we want to change the culture it must have consequences more than an apology on Facebook,” she said.

Before issuing his general apology on Monday, Mr. Jensen had denied any wrongdoing against Ms. Priess. He has not spoken about her specific allegations since then.

Sonja Marie Jensen, 26, a Social Democrat member of the City Council in Nyborg, a town in central Denmark, in 2017 became one of the first people in Danish politics to speak about having been sexually harassed, in her case by fellow council members.

“Legal equality is fine, but we don’t have cultural equality,” she said. “I’ve seen it happen, and I’ve seen that it wasn’t just me,” she added.

Nonetheless, change has been slow to come. The momentum increased when a popular television host, Sofie Linde, 30, used the stage during an award show in August to mention that a “TV hot shot” had threatened to destroy her career if she refused to perform oral sex on him. It had happened, she said, during a Christmas party several years ago at DR, the state broadcaster.

“You know who you are and you know I said no,” she said with a firm look at the camera.

Kristian Madsen, 45, a political analyst and former member of the Social Democrats, said, “Firewood was gathered since 2017, but Sofie Linde was the spark that started the fire.”

Ms. Linde was 18 at the time of that Christmas party, and she said that she had made a point of not naming her abuser because she wanted to target the culture more than individuals. In the weeks after her statement, 1,615 employees in the media industry signed a letter stating that they too were either victims of abuse or knew about abuse in their industry. So did 800 nurses and doctors and 689 academics.

More specific accusations quickly followed. This month, the political leader of the centrist Social Liberal Party, Morten Ostergaard, resigned and admitted several instances of sexual harassment. This week, Mads Aagaard Danielsen, a well-known radio host, was fired from DR after several women and men came forward with evidence of hate messages and abuse from him over several years. Mr. Danielsen has acknowledged many of the accusations, apologized and said he planned to seek professional help.

Pressure is also building on Denmark’s foreign minister, Jeppe Kofod, over a sexual encounter in 2008 with a 15-year-old party member. He was a 34-year-old member of Parliament at the time and was briefly demoted when the case became public shortly after it happened. 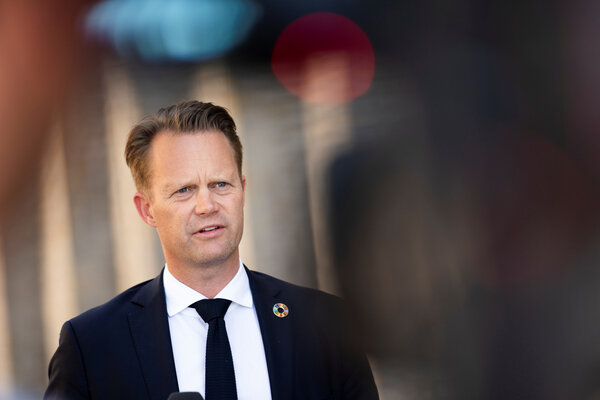 The encounter was not necessarily a criminal offense — Denmark’s age of consent is 15 unless the older party has authority or responsibility over the younger — and the girl never pressed charges. But the minister was forced to repeat his apologies last month, and lawmakers have demanded his resignation.

Another senior Social Democrat lawmaker, Jesper Petersen, 39, admitted on Wednesday that he too had had sex with a 15-year-old, at age 20, after having met her as a substitute teacher. In the apology he posted to Facebook after an approach from Ekstra Bladet, a Danish tabloid, he said that he had “neither pressured her into anything nor done anything against her will,” but acknowledged that she had “subsequently been negatively affected by it in various ways.”

Mr. Madsen, the political analyst, likened the situation to the impact of the 1968 youth movement. “It’s the young telling the older that their rules don’t apply anymore,” he said.

But Ms. Priess, the youth wing chairwoman, said it remained the responsibility of the older people in power to change the culture. She herself, she added, had taken the first chance she got to raise the alarm about Copenhagen’s mayor.

“If others had spoken up before I did, it wouldn’t have come this far,” she said.

Brr, it's cold outside: Rainy days ahead in Singapore, with temperatures to dip to 22 deg C

Philippines mulls subsidising coronavirus tests to boost tourism
We and our partners use cookies on this site to improve our service, perform analytics, personalize advertising, measure advertising performance, and remember website preferences.Ok