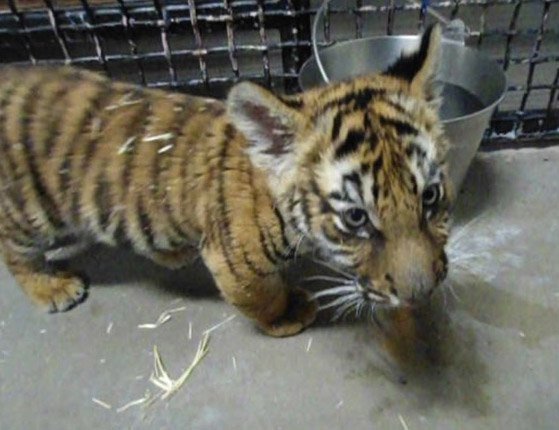 Local cops in New Mexico were shocked to discover a tiny Bengal tiger cub while investigating reports of a shooting at an Albuquerque mobile home.

Officers from the Albuquerque Police Department responded to a shooting on Tuesday. They arrived to find a man shot in the leg outside an Allsups Convenience Store.

They determined that the victim was not involved in the shooting, but instead was hit by a stray bullet.

While they were on the scene, they heard another shot fired nearby. They followed the sound of the shot to a mobile home and found suspect Gerardo Vargas Mercado, who was armed with a handgun with an extended magazine.

The officers then called the New Mexico Department of Fish and Game, who took custody of the animal. It has since been taken to ABQ BioPark, which operates the Albuquerque Zoo, Aquarium, and Botanical Garden.

In August last year, police were called to the area when a resident reported somebody had an illegally owned tiger cub in their home.

No tiger cub was ever found in the August investigation, but they did find someone keeping a 3-foot long alligator in their home, along with illegal drugs, firearms, and large amounts of cash.

The alligator was also taken to ABQ BioPark, then eventually transported to a zoo.

Fish and Game Department Field Operations Division Colonel Tim Cimbal said that he did not think the tiger found in January was the same one reported in August.

‘The tiger from August is believed to be more than 1 year old and likely weighs 50-90 pounds at this time,’ Cimbal said. ‘The tiger confiscated Tuesday is only a few months old and weighed only 20 pounds.’