The 7-year-old was at the Cardiff Castle in Wales along with her parents, Prince William and Kate, and her brother, Prince George. In a short video filmed by a royal fan, the Duke of Cambridge passes by and greets people, followed by George and Charlotte.

The person shooting the video gets a handshake from the future King, and then also from the 8-year-old heir, who is third in line to the throne.

Then, the royal fan attempts to also greet the Princess with a handshake, but the little girl initially seems a bit shy and hesitant.

However, she soon gives in and gifts a brave handshake to the attendee, along with a charming smile.

The family travelled to the Wales capital ahead of a performance in celebration of the Queen’s Platinum Jubilee.

A concert on the castle’s grounds included performances from Welsh singers Bonnie Tyler and Aled Jones. 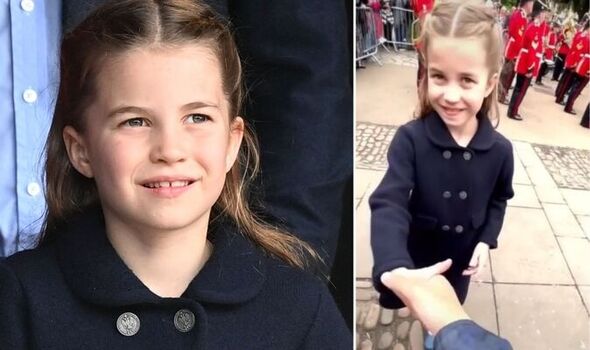 The visit was one of a number of members of the royal household carried out across the nations of the United Kingdom to mark the Jubilee.

For George and Charlotte, this was the first official visit to Wales, Kensington Palace said at the time.

During her appearance, she smiled and held Kate’s hand as the Duchess waved to well-wishers.

George, who is one day expected to be given the title the Prince of Wales, also joined his family as they chatted to crowds of royal fans as William placed his arm around his eight-year-old eldest son.

Missing was four-year-old Prince Louis who stole the show when he appeared on Buckingham Palace’s balcony with the Queen and the royals after the Trooping the Colour ceremony on Thursday.

George was seen grinning as William stood behind him with his hands on his shoulders – with the Prince wearing a mini-me version of his father’s blue suit and open-necked shirt.

Welsh singer Bonnie Tyler who performed was made an MBE in the Queen’s Birthday Honours for her services to music.

Just before emerging from the castle to a street lined with well-wishers waving British flags, George and Charlotte were introduced to goat and The Royal Welsh mascot Lance Corporal Shenkin II.

The family waved as they set off back to London to join the rest of their family in London for this evening’s celebrations.

Putin, Long the Sower of Instability, Is Now Surrounded by It