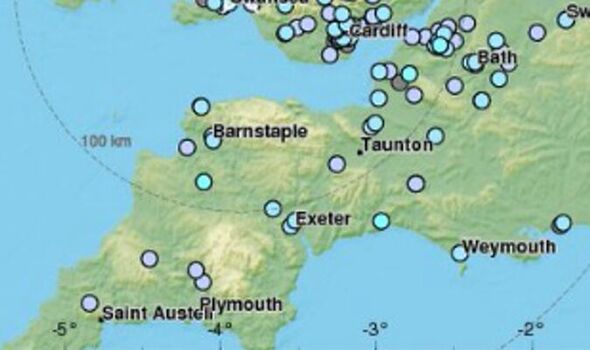 The tremor happened at Constantine, near Falmouth, over the Queen’s Jubilee weekend. Data from the British Geological Survey (BGS) showed the microseism was a shallow earthquake, as it occurred at a depth of 5km. Shallow quakes tend to lead to more intense shocks than deep ones.

The seism had a magnitude of 0.1 – equivalent to a hand grenade. Earthquakes with a magnitude below 2.5 are not usually felt but can be recorded by seismographs.

Hundreds of thousands of similarly small earthquakes are recorded every year around the world, including in Cornwall and across the UK.

In February, a 3.2 magnitude quake rocked the West Midlands near Walsall, with residents describing explosion-like sounds in the Birmingham area.

Others said they were left “terrified” after the tremor, with a depth of 10km, hit 7km northwest of the city.

Meanwhile, a 3.8-magnitude earthquake was recorded in the centre of Shropshire last week – the third quake to hit the UK within 24 hours.

According to the BGS, it was “felt by many residents in the region, mainly from within around 60km of the epicentre”.

The organisation added people reported “noticeable shaking” and an “odd trembling … faint, but persisted for about three seconds”.

It was the third earthquake with a magnitude of more than two to hit the country within one day.

A 2.1-magnitude earthquake had been recorded in Arran, North Ayrshire, Scotland, just before 9am the same day, while a quake with a magnitude of 2.3 struck in Sale, Greater Manchester, at 9.40pm the day before, the BGS said.

West Mercia Police and Shropshire Fire and Rescue service told the PA news agency they had not been called to any reports of incidents related to the quake.

Meghan Markle news: What is Meghan REALLY like to work with? Former hairdresser opens up