More than three million people in England have already been infected with coronavirus, a new study suggests.

A major testing programme, led by Imperial College London, found that just under 6% of England’s population – an estimated 3.4 million people – had antibodies to COVID-19 and were likely to have previously had the virus prior to the end of June.

This is more than 12 times the number of cases shown by the government’s official figures, which state a total of 270,971 people in England had a positive coronavirus test confirmed by a laboratory as of 4pm on Wednesday. 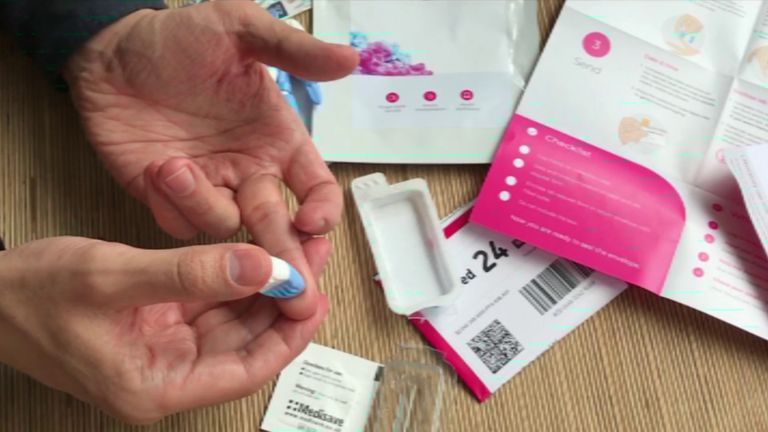 The tests use a drop of blood from the finger and give a result in just 15 minutes, which participants read themselves and upload via an online survey.

It was the first nationwide antibody surveillance study to be rolled out across England using home self-testing.

The findings, in a non-peer-reviewed report, showed that London had the highest number of people testing positive for COVID-19 antibodies (13%) at more than twice the national average, while the South West had the lowest (3%).

People working in care homes (16%) and healthcare (12%) returned far higher results than people who were not key workers, at 5%.

Black, Asian and minority ethnic (BAME) people were between two and three times as likely to have had COVID-19 compared to white people.

This gap was reduced after the researchers took into account factors such as age and key worker status, but rates were still higher overall for BAME people.

Those aged 18-24 had the highest rate of positive results (8%) and were more than twice as likely to test positive than those aged 65 to 74, who were least likely to have had the virus (3%).

People from the poorest areas were more likely to have had COVID-19 (7%) compared to those from the least deprived (5%).

And people living in households of more than seven people were more than twice as likely to have been infected than those living alone or with one other person (13% vs 5%).

The overall infection fatality ratio – the proportion of infected people who died – was calculated to be 0.9%, similar to other countries such as Spain.

Antibodies were found in almost all (96%) of those who had a previous infection confirmed by a swab test.

People who had severe symptoms from the disease were twice as likely to have antibodies than those with no symptoms from suspected or confirmed COVID-19 (29% versus 14%).

The highest numbers of positive results were in people who reported confirmed or suspected COVID-19 during March and April.