COVID-19 was brought into the UK on at least 1,356 occasions by travellers mainly from Europe, a major study of the genetics of the virus has found.

Spain and France were where most travellers who then spread the disease came from, researchers from the University of Oxford, University of Edinburgh and the COVID-19 Genomics UK Consortium (COG-UK) found.

The analysis found China, where the virus originated, had a less than 1% impact on cases in the UK.

The geneticists then pieced the route of transmission from each person who came into the UK with COVID-19 and spread it to others.

They found the virus had 1,356 origins – not one – and believe this is actually an underestimate.

They estimate 80% of all those who came to the UK and spread COVID-19 arrived between 28 February and 29 March – when the UK was debating whether to halt international travel and go into lockdown.

Researchers found the numbers of people travelling into the UK and spreading coronavirus rose rapidly in early March and peaked around 15 March before quickly declining to a low level in April after the lockdown started on 23 March.

Early cases came into the UK from Italy and China, but by early March travellers from Spain who passed on COVID-19 surpassed both of them, then those from France from mid to late-March. 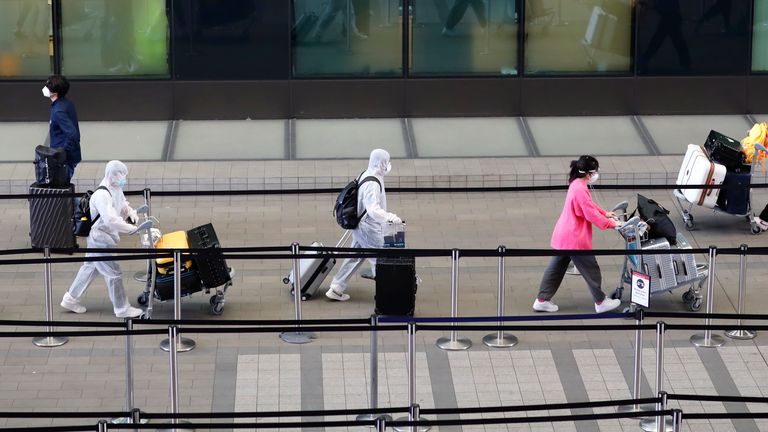 A football match between Liverpool and Atletico Madrid at Anfield on 11 March was largely blamed for an increased spread of COVID-19 in the UK.

But, the researchers said that likely had a negligible impact on the numbers of transmissions as an estimated 3,000 fans travelled from Spain, among a total of 20,000 passengers from Spain a day in mid-March.

Although travel from France is as frequent as from Spain, researchers said the epidemic in France happened later, by which point there were many fewer inbound travellers.

Of all inbound passengers in 2020, 50% have been British nationals.

Professor Sharon Peacock, director of COG-UK, said: “The COG-UK consortium has now sequenced more than 24,000 genomes. This is providing the foundation for a better understanding of this outbreak.

“It also helps us shape our future response, including the development of systems to predict the introduction of SARS-CoV-2 into the UK.

“This could inform policy decisions on travel, and may provide valuable information to other countries through international collaboration.”

Novichok victim: I felt guilty my family were forced to leave home