An endangered species of seahorse has returned to its former stronghold in Dorset due to the coronavirus lockdown, marine conservationists say.

The Seahorse Trust says during one regular dive at Studland Bay, it found 16 spiny seahorses – including pregnant males and a juvenile that had been born this year – its largest daily discovery there since 2008, and the first sighting for two years.

The charity believes it is down to fewer people and boat traffic in the area – with less noise associated with anchors – since COVID-19 measures were introduced more than two months ago. 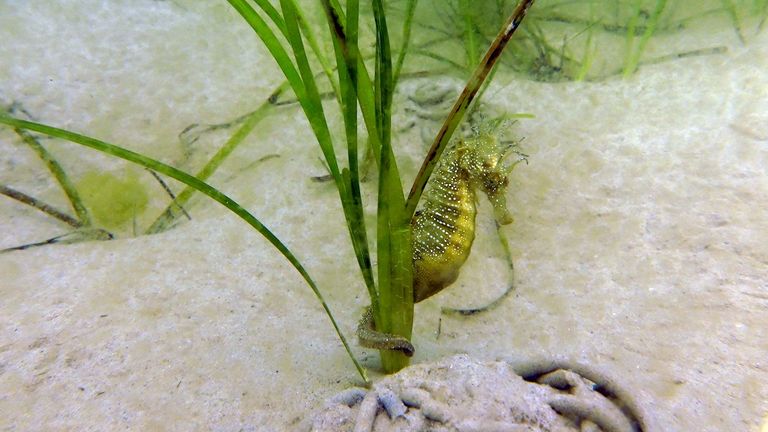 Founder Neil Garrick-Maidment says the ecology of the site has made a “remarkable” comeback.

“We have seen so many seahorses because the food chain has recovered, giving seahorses plenty of food to eat, and crucially, somewhere to hide,” he said.

“The seagrass has started to repair itself, and the spiny seahorses have taken advantage of this.”

Both of the UK’s native seahorse species – the spiny and the short snouted – were granted protected status in 2008 under the Wildlife and Countryside Act.

After years of campaigning, Studland Bay was finally designated as a Marine Conservation Zone last year in recognition of the importance of its seagrass habitat and seahorse population.

“The question is how we go forward,” Mr Garrick-Maidment added, saying they “do not want boats and divers banned”, but that the tiny marine fish and seagrass “do need their legal protection enforced”.

He said: “The 16 seahorses discovered on a single dive are an amazing discovery, but we now need the Marine Management Organisation (MMO) and Natural England to enforce the Wildlife and Countryside Act and the Marine Conservation Zone and put in place measures such as environmentally friendly moorings.

“The seahorses need protection to stop them being disturbed again as COVID-19 restrictions are lifted, and to stop them vanishing from this legally protected site.

“We have a unique opportunity to help nature and to restore the balance of our planet.

“We must grab this with both hands, for the seagrass, for the sea, for humanity and crucially for these incredible seahorses.”

REVEALED: The ONE thing Meghan Markle has LOST from her relationship with Prince Harry