According to government figures, the number of daily infections has dropped for the seventh day in a row raising hopes the second national lockdown is working. A further 529 people were reported to have died after contracting the deadly coronavirus.

The seven day drop in infection numbers gives hope the lockdown strategy in England is working.

On November 5, the country entered its second national lockdown in a bid to curb the spread of the virus.

Under the new measures – which are expected to last until December 2 – pubs, bars and restaurants were forced to close again. 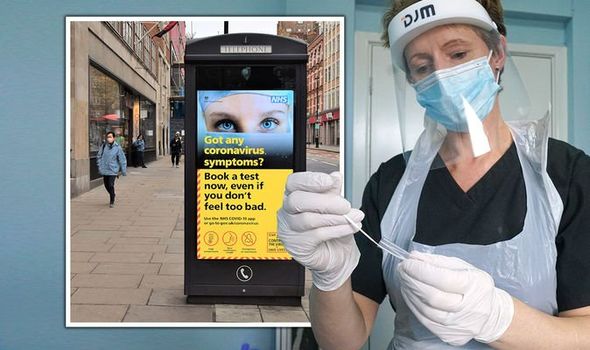 People are advised to work from home unless they have to and there is a ban on households mixing both indoors and outdoors.

Before the second lockdown, several towns and cities across the country were placed in different tiers depending on the risk of spreading the virus.

Ministers are working out what new tiers should replace the previous system once England emerges from the current lockdown on December 2.

Government Ministers have said it is still too early to say whether restrictions will be eased over the Christmas period.

Business Secretary Alok Sharma said: “I just think it’s too early to be reaching any conclusions on that.

“What none of us knows right now is what the infection rate is going to be in different parts of the country.”

While Health Secretary Matt Hancock added: “At the moment most of the tests we are getting back, most of the positive cases, are from around the time when the lockdown came in, so it is too early to see in the data the impact of the second lockdown.

“But we absolutely hope to be able to replace the national lockdown with a tiered system similar to the one we had before.”

Earlier today, Dr Susan Hopkins, a senior medical adviser to the Government’s Covid-19 response, suggested tougher restrictions could be needed either side of Christmas if curbs are to be eased over the festive period.

She told a Downing Street briefing: “We are very keen that we have a Christmas as close to normal as possible.

“That requires all of us to make every effort over this national restriction period and even in early December to get the cases as low as possible and to reduce the risk of transmission within households and between families.

“A final decision will rest with the Government and we look forward to hearing what those plans are.”

This latest seven day drop comes as the coronavirus vaccine from Pfizer – which is due to arrive in the UK before the end of the year – was found to be 95 percent effective and works in older people, according to new data from the firm.

The pharmaceutical giant and its partner BioNTech said new figures from 170 participants in their clinical trial showed the jab was 95% effective in preventing Covid-19, with a 94% effectiveness in those aged 65 and over.

Of the 170 Covid-19 cases in the new analysis, 162 were observed in the placebo group versus eight in the vaccine group.

“We continue to move at the speed of science to compile all the data collected thus far and share with regulators around the world.

“With hundreds of thousands of people around the globe infected every day, we urgently need to get a safe and effective vaccine to the world.”

The UK has secured 40 million doses in total of the vaccine, with 10 million due in the country by the end of the year if the vaccine is approved.