Home » Europe » Coronavirus: Oldham is on the verge of lockdown – but its bars and pubs tell a different story

Oldham is a town on the verge of a full local lockdown. Not that you’d know if you glimpsed its bars and pubs.

Their job: to make sure they are following COVID-19 guidelines. 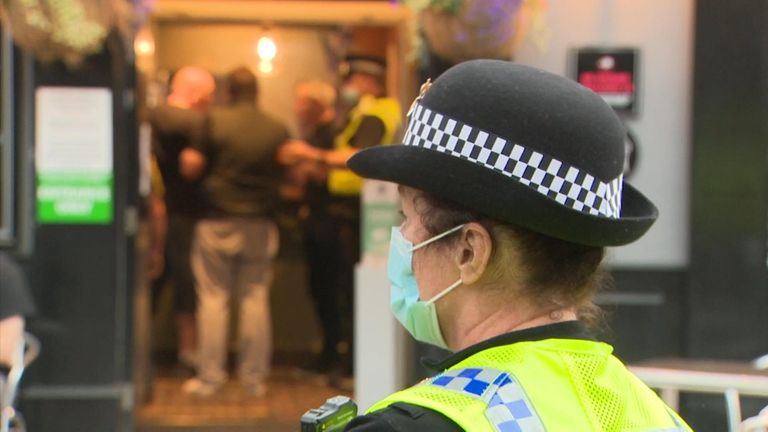 The bars we visited were restricting the numbers allowed in but were either at, or close to, capacity.

And after a few drinks, large numbers can be difficult to control.

“I don’t think anybody likes being told what to do,” PC Nicola Shipway told us. “And we really do not like telling them what to do. But it’s for their own good, it’s really for their own well-being and their families.”

This is a different type of policing from what these neighbourhood officers are used to.

Patrol team leader, Sgt Lee Ingham, says normal policing, the day job, has taken a “back seat” as officers try and stop the people, and places, flouting the rules.

He finds that frustrating.

“I get emails asking about issues that are affecting constituents,” he says. “And I cant respond to them, I can’t go out to see the victims of crimes, because we’re trying to deal with the COVID legislation.” 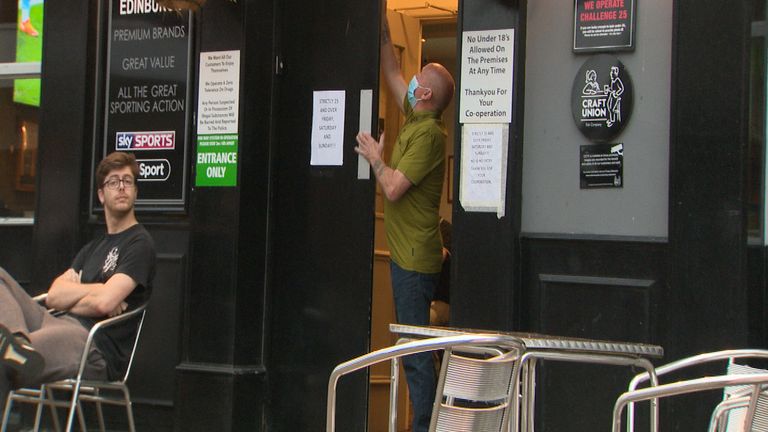 But it’s clear there is work for these COVID-19 patrols to do as they try and avoid a full local lockdown that would be catastrophic for the local economy.

“I understand that pubs have been shut,” Sgt Ingham says, “and landlords need to get people in the door, but at the same time they’ve got to be secure.”

An undercover Sky News team revealed earlier this week that nine out of 10 licensed venues in Greater Manchester were not following government guidelines by collecting customer details for contact tracing.

It’s difficult to police that particular guideline in England because it’s not mandatory by law.

But we witness what these officers can do. They engage with landlords, licensees and door staff to educate them on how to make venues as safe as they can be.

But its more than just friendly advice.

Officers spot a group of four men in one venue hugging and standing close to the bar. They intervene.

“I know you’re having a good time,” he tells the group, “but this doesn’t look great, does it?”

But Sgt Ingham is firm, telling them their actions could mean this pub, their regular, gets shut down.

Soon, they are all apologies. 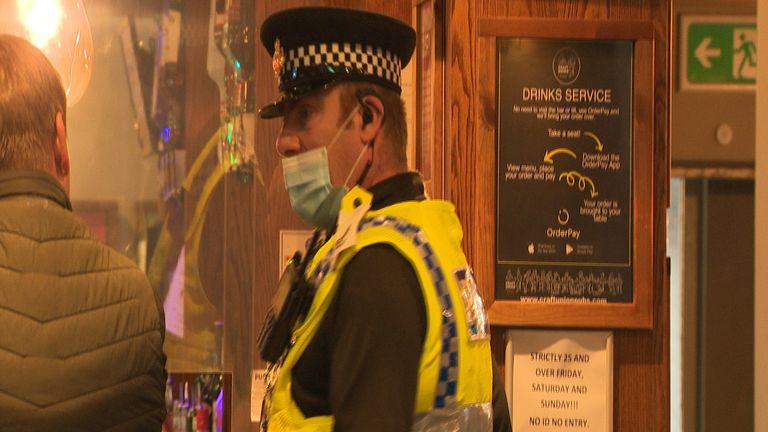 Officers can issue Fixed Penalty Notices for repeat offenders but Sgt Ingham tells me these are a last resort.

Landlord Terry English is grateful for that because it could cost him sorely needed customers.

“We’re at capacity now,” he tells Sgt Ingham, “and as soon as you’re gone I’ll close the door.”

As we leave, we see he does.

But with many more venues than officers, it’s now a matter of trust.