Home » Europe » Coronavirus: PM under pressure to toughen restrictions after highest death toll since May

The prime minister is under mounting pressure to bring in tougher coronavirus rules after UK deaths hit their highest level for five months.

There were 367 deaths linked to the virus recorded on Tuesday, and nearly 23,000 more cases.

Downing Street has not rebuffed an internal projection from its SAGE experts that this winter could see more fatalities than the spring, with a spokesman calling latest figures “concerning”.

The prime minister is coming under “intense” lobbying from experts such as chief scientific adviser Sir Patrick Vallance to ramp up restrictions, according to The Daily Telegraph.

It says government advisers fear that daily deaths could remain in the hundreds for at least three months.

They have also warned that the whole of England will need to be under the toughest Tier 3 restrictions by mid-December, The Sun reports.

The current official count of COVID-related deaths in the UK is nearly 59,000.

Dr Yvonne Doyle, medical director of Public Health England, warned on Tuesday that rising deaths were likely to “continue for some time”.

As the effort to suppress the rise in cases and deaths continues, West Yorkshire is rumoured to be the next heading for Tier 3 coronavirus rules – meaning extra restrictions on household mixing and shutting pubs that don’t serve food.

Warrington entered the top tier on Tuesday, while the Nottingham area is set to join from Thursday.

Staffordshire, meanwhile, is in line to be upgraded to Tier 2 – meaning no indoors household mixing – as soon as the weekend.

It means more than eight million people could be under the strictest lockdown by the end of the week, prompting calls for clarity on how the restrictions will be eased.

The concerns over a North-South divide has prompted Tory MPs in the new Northern Research Group to write to Boris Johnson urging a “clear road map” out of the lockdown. 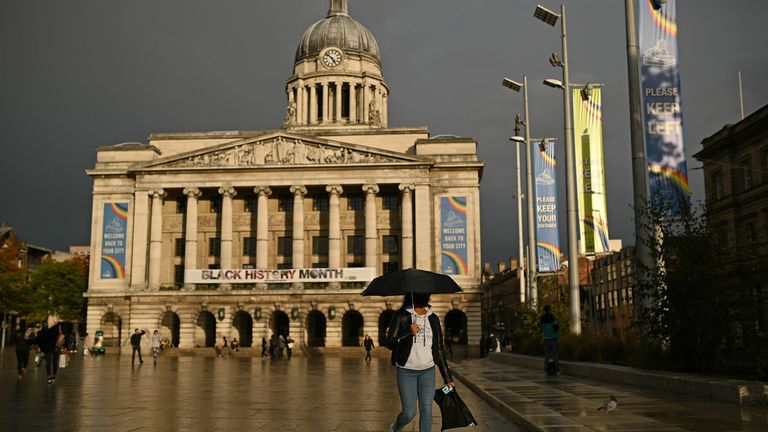 Head of the group, Jake Berry, said “the cost of Covid and the virus itself threatens to send the North into reverse”.

It comes as the chair of the UK Vaccine Taskforce warned that the first generation of vaccines “is likely to be imperfect” and that they “might not work for everyone”.

Kate Bingham cautioned against over-optimism and said any vaccine might not work for everyone, or for very long.

In other significant coronavirus developments, France is said to be on the verge of another blanket national lockdown.

President Macron will address the nation later after the country’s death toll reached 523 – the highest since April – while cases topped 33,000.