Social gatherings of more than six people will be illegal in England from Monday after the number of daily positive COVID-19 cases in the UK rose to almost 3,000 amid fears of a second wave. Mr Johnson will use a press conference today to announce the change in the law, which will see the legal limit on social gatherings reduced from 30 people to six at indoor and outdoor locations – including private homes, as well as parks, pubs and restaurants.

The news is a blow to the British public who have spent the last few months returning to a new normal following months of confinement to their homes from the end of March.

But with coronavirus cases continuing to surge, should Mr Johnson introduce a second full national lockdown in a bid to flatten the growing second wave’s curve?

Gatherings of more than six people will be allowed where the household or support bubble is larger than six, or where the gathering is for work or education purposes. 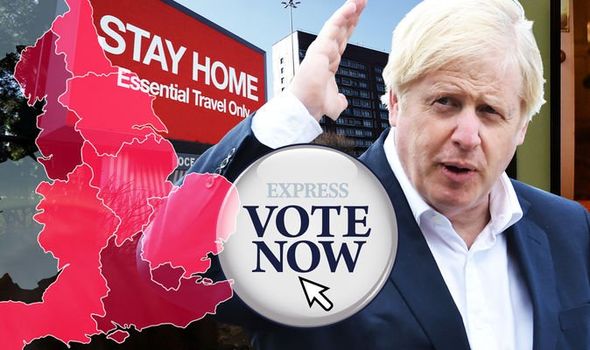 Exemptions will also apply for weddings, funerals and COVID-secure organised team sports, with a full list to be published by the Government before Monday.

The Government hopes that the change to the law will make it easier for the police to identify and disperse illegal gatherings.

Police will now have the power to break up large groups and slap people with fines of £100, which will double on each repeat offence up to £3,200.

Mr Johnson is expected to tell the press conference: “We need to act now to stop the virus spreading. So we are simplifying and strengthening the rules on social contact – making them easier to understand and for the police to enforce.

“It is absolutely critical that people now abide by these rules and remember the basics – washing your hands, covering your face, keeping space from others, and getting a test if you have symptoms.”

Some 2,420 lab-confirmed cases of coronavirus were recorded in Britain as of 9am on Tuesday, following the 2,988 reported in the UK on Sunday, which was the largest daily figure since May.

The change to the law comes after Mr Johnson told his Cabinet that ministers must ensure there is “no complacency” among the public, and particularly young people, following the rise in coronavirus infections.

And Health Secretary Matt Hancock warned of a possible second peak, as he imposed further measures in Bolton restricting all hospitality to takeaways only – as well as new rules meaning venues will have to close between 10pm and 5am.

Different rules apply to social gatherings elsewhere in the UK.In Scotland, up to eight people are allowed to meet indoors, while groups of 15 from up to five households are permitted outdoors, but people should maintain a social distance.

People there should not meet people from more than four other households in total whether indoors and/or outdoors.

In Wales, up to 30 people can meet outdoors and in Northern Ireland the number is 15.